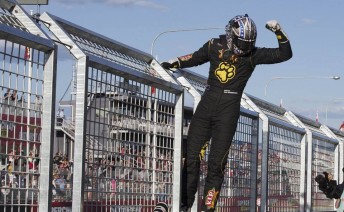 Shane van Gisbergen and Jonathon Webb will start Sunday’s Supercheap Auto Bathurst 1000 from pole position after a committed lap from the Kiwi in the Top 10 Shootout.

Van Gisbergen was the penultimate man out in the one-at-a-time session, clocking 2:06.33s to knock previous fast-man Mark Winterbottom from the top of the order.

“The track was quite slippery, there was a lot of dirt on it which is why the times weren’t very fast,” explained Van Gisbergen.

“But it was a clean lap which is what I wanted to do.

“We’ve been making our car better and better. It was pretty horrible at the start of the weekend, always fast but hard to drive.”

The reigning race winner’s time proved 0.3s shy of Van Gisbergen’s, having lost ground with a slide at The Dipper.

Scott McLaughlin and Jason Bright will share the second row having both momentarily headed the order after their laps.

Craig Lowndes took to the circuit after a major post-practice rebuild and rewarded his Red Bull crew with a conservative run to sixth.

Perkins had been on target to at least hold his seventh placed effort from qualifying before losing time with a rear lock-up at the final corner.

Just nine cars took part in the session after Garth Tander’s Commodore was withdrawn from the weekend following a crash with co-driver Warren Luff at the wheel during morning practice.