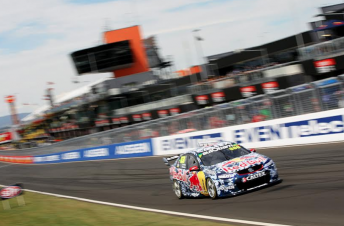 Craig Lowndes is confident of turning around a tough weekend

Craig Lowndes believes that he remains well in contention for a sixth Bathurst victory, despite a difficult pre-race build-up for Red Bull Racing Australia.

The team was forced to repair heavy rear-end damage to its Lowndes/Steven Richards entry today after the former was an innocent victim in a heavy morning crash with Warren Luff.

Lowndes returned to the track for the evening’s Top 10 Shootout, where he drove conservatively to book sixth place on the grid.

The drama came a day after team-mate Jamie Whincup crashed in qualifying, ensuring that he and co-driver Paul Dumbrell will start back in 23rd.

The normally pace-setting Red Bull team has proven one of many struggling to find a balance with their cars on the new track surface.

Lowndes, however, insists his car felt “much better” during the early stages of morning practice following major overnight changes.

“It was great to give the car a run in the Shootout,” Lowndes told Speedcafe.com.

“I’m confident the car will nice and speedy for the race.

“It will swing around as temperature of the day goes up and down, but I think we are in good shape

“We have started on the third row for the last five years and we have won some races from there.

“Its been quite a hectic build-up and I know the guys are quite tired,” he added.

“We have probably done more changes here than we have done anywhere searching for that balance.

Whincup’s disastrous qualifying ensured a quiet Saturday, with no track duties beyond the morning hit-out.

Unlike Lowndes, the five-time V8 Supercars champion said he continued to struggle during Practice 6.

“Our car unfortunately felt worse in practice today, we made some changes overnight and we went the other way,” he said.

“We may need a genie to come and rub some luck on it tonight so we can be on the race pace tomorrow.”