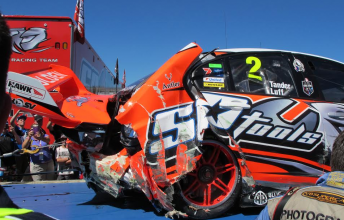 The Tander/Luff Commodore has been withdrawn

The car was crashed heavily in this morning’s sixth practice session due to a brake failure on Mountain Straight.

Luff escaped injury in the incident, which saw the #2 HRT Holden collide with Craig Lowndes’s car before hitting the tyre wall and ending up on its side.

CLICK HERE for more on the crash, including video

After initial attempts at a repair, the team has confirmed that it will withdraw the car due to the extent of the damage.

“After further assessment, it became clear that the #2 Commodore’s roll cage had sustained damage beyond what we could physically repair in the time remaining before tomorrow’s Bathurst 1000,” said Walkinshaw managing director Adrian Burgess.

“It’s not a decision we’ve taken lightly, however safety always comes first – and we’re just glad that Warren is OK after his accident.

“We’ll now focus our efforts on the #22 Commodore of James Courtney and Greg Murphy – and try to get a result from tomorrow’s big race.”

Added Tander: “Our first concern was for Warren and it’s great to know that he is ok. Missing Bathurst is disappointing, but it is what it is.

“We might not be competing tomorrow, but it’s not over for HRT, there’s another car still in the garage that we’ll turn our attention towards and we’ll do all we can to help James and Murph win the race.”

Tander and Luff were among the favourites for The Great Racing having finished third at last month’s Sandown 500.

The accident further depletes what was already set to be the smallest field in the history of the Bathurst 1000.