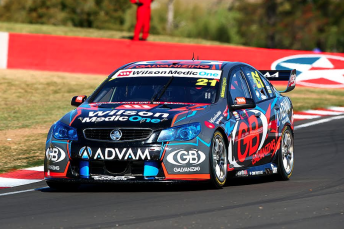 The Brad Jones Racing Holden driver leapt into the Shootout field with a blistering 2:06.24s lap with only seconds remaining at the end of the session.

Wood, the reigning Dunlop Series winner, was coaxed into extracting more commitment across the top as the seconds ticked away in qualifying.

“It’s been tough; we’ve had a bit of a lull mid-season and I’ve done a bit of soul searching and searched for a bit of everything,” Wood told Speedcafe.com.

Reporting that he had difficulty hanging onto his Team Advam/GB Commodore to his engineer Julian Stannard, Wood managed to summon the strength to tidy the points across the top of the mountain where he was losing time.

“I came on the radio so many times saying get me in (the pits for set-up changes), I can’t hang onto it,” Wood said.

“But it was kind of refreshing sitting down with Brighty and Fabian, who were having the same problems.

“Just trying to get one lap out of it was pretty scary.

“I rolled out and Julian (Stannard) said you are going to have to push we had under three minutes to go.

“Over the top were the areas that I felt on my previous sets that I just hadn’t committed as hard as I could into the grate, over McPhillamy and down into the Esses.

“I was so wrapped to cross the start/finish line and didn’t see the chequered flag and I knew the lap was on.

“It all just came together really well. It was always how I’d hoped and imagined it was going to happen.

Also making a shock entrance into the top 10, Perkins arrested a lean year for Team Jeld-Wen by qualifying seventh fastest in the #18 Falcon he will share with Cam Waters.

“When you see guys like Whincup and Reynolds crash you realise how hard it is,” an emotional Perkins told Speedcafe.com

“It’s been a long time coming this year and this feels like a bit of consolation.

“I just want to get a good result at Bathurst and making the Shootout is a very good step in the right direction.

“Cam (Waters) has got speed so bring on Sunday.

“This is a childhood dream of mine to get success at Bathurst. After the year I’ve had it’s emotional.

“It’s good to show how people you can do it.”

The Shootout is scheduled to start at 1710 local time tomorrow.