Winterbottom into the 2:05s ahead of qualifying

Winterbottom into the 2:05s ahead of qualifying 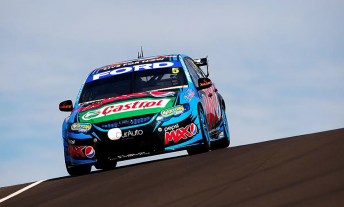 The Pepsi Max Falcon driver laid down the benchmark after 30 of the session’s 50 minutes.

Initially 0.7s quicker than the field, the time withstood a barrage of late flyers as the field completed their qualifying simulation runs.

Winterbottom himself got closest to going faster, clocking 2:06.0s on his last run after another set-up change.

A 2:06.1s for Scott McLaughlin after the chequered flag put the Volvo second ahead of Jamie Whincup’s Holden and Winterbottom’s FPR stable-mates David Reynolds and Chaz Mostert.

“It’s pretty cool to be the first bloke to do a 2:05s, but this afternoon we’re going to go quicker when it cools down,” said Winterbottom.

“It’s awesome to be quick, but unfortunately that’s only practice, so we’ll tune it up and go again.

“The car rolled out of the truck well but the track keeps changing, so we’ve got to keep tinkering away.”

McLaughlin survived a wild off through McPhillamy Park early in the session that saw the Volvo skip through the sand trap and narrowly avoid the concrete wall.

Van Gisbergen endured a dicey encounter of his own, grazing the concrete at The Cutting in the early going, but continuing largely unhindered.

The session was punctured by a single red flag, called early for Todd Kelly’s Nissan, which had stopped at McPhillamy Park.

Kelly was able to drive the Altima back to the garage under its own power, before rejoining the session soon after.

Qualifying is scheduled to get underway at 1500 local time, setting the grid for Saturday’s Top 10 Shootout.