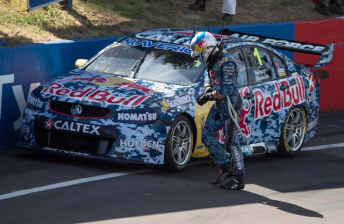 Jamie Whincup says his Supercheap Auto Bathurst 1000 hopes are not over despite an “amateur mistake” in qualifying that leaves the Red Bull Holden to start from the back of the grid.

Whincup lost control at The Cutting in qualifying before slamming into the wall, damaging the front of his Commodore.

The accident occurred on his first flying lap having been unable to set a time earlier in the session due to red flags for a crash involving Ford Performance Racing’s David Reynolds.

Although this is the first time the reigning V8 Supercars champion will start Bathurst from outside the top 10 since 2004, Whincup remains confident he can still challenge for victory in the race.

“I won’t make any big statements but we will try to let the driving do the talking,” Whincup told Speedcafe.com when asked if he still believed he could win Sunday’s race.

“It’s going to be difficult but I have so much confidence in the crew.

“It’s all about how teams react and how people react to things like this now. We will see it as a challenge.

“The only big cost is pride having now got to start from the back for the Great Race.

“It felt like we were back on track (after struggling with set-up throughout the weekend), but I have got to put my hand up, it was a driver error.

“I have been a little bit slow through The Cutting all weekend so I tried a bit harder and I lost the rear-end through the kink.

“Unfortunately, I have had that experience of going into that wall before (during practice in 2011) and there is a gate at the end of someone’s house. I ended up hitting the gate and it did the damage to the car.

“I did feel like a big hit. I haven’t had a big hit for a while, so maybe I’m getting soft,” he added.

“I was already disappointed before I even hit the wall. I thought, “I’m going in here what an idiot, what am I doing, this is amateur stuff.” I expect a bit more from myself.

“But it’s happened and now I have just got to move on and get on with it and maximise Practice 6 to get a good car for the race.”

Whincup is confident that the damage to his Holden is largely superficial ensuring the car will be ready for the final practice session.

“Having looked at the damage it is nowhere near as bad (as it looks),” added Whincup.

“I thought there could be chassis damage to be honest touch wood its all pretty much bolt-on stuff.”