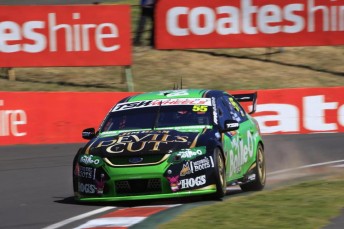 Reynolds, Mark Winterbottom and Fabian Coulthard all gate-crashed the lap record in the dying seconds, with The Bottle-O Falcon almost 0.5s clear of Craig Lowndes practice benchmark, set in 2010.

The third session proved another bruising encounter with Garth Tander and Robert Dahlgren both crashing at the top of The Mountain.

The factory Holden and Volvo drivers came to grief in separate incidents at The Dipper, putting both cars out of the session.

Tander’s mistake came moments after becoming the first man to dip into the 2:07s bracket with 15 minutes remaining.

The crashes compounded an already difficult day for the two cars, which missed most of Practice 2 with mechanical problems.

Less than five minutes were left once the session restarted, resulting in a scramble for the top runners to complete two late flying laps on fresh tyres. 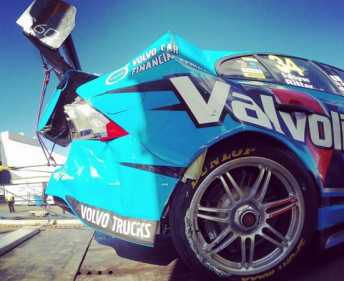 Rick Kelly was on top of the sheets at the time of the stoppage but found himself 12th after the late flurry.

Lowndes was the first into the 6s with a 2:06.97s, before Winterbottom (2:06.48s) and then Reynolds lowered the benchmark further.

Coulthard put in two almost identical 2:06.5s to be the fastest Holden ahead of Scott McLaughlin’s Volvo and Jason Bright in the second of the BJR entries.

“It feels pretty good to have the current lap record at Bathurst,” reflected Reynolds post-session.

“Growing up and watching Murphy smash the lap record and then here I am today.

“I started out being pretty scared about the whole idea of racing Supercars here,” he added, noting the hairy nature of most cars this morning on the new surface.

“I nearly binned it a few times. It’s really, really edgy here. The car balance changed quite a bit but we were able to tune it up and made a few good changes.”

Lowndes fell to eighth in the late stages while team-mate Jamie Whincup struggled to 17th.

“It was a really tough day for us,” said Whincup, who lost the best part of half an hour in opening practice while the team fixed a driveline issue.

“We’re not in the ballpark with the car at the moment and we’re currently around the mid-pack. I had a suspicion that this might be the case today and it has been.

“With the massive change in track conditions as a result of the resurfacing, it’s always a lottery on how much pace you’re going to have when you roll off the truck.”

Two more practice sessions are scheduled to take place on Friday ahead of qualifying.