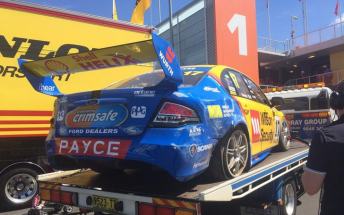 The damage to David Wall’s Falcon

Chaz Mostert set the pace in an opening practice for the Supercheap Auto Bathurst 1000 that featured high drama for Dick Johnson Racing.

David Wall endured a wild ride in DJR’s #17 entry after a right-rear tyre failure on Conrod Straight early in the session.

The yellow and blue Falcon spun before making front and rear contact with the concrete barrier.

Wall had been on his way back to the pits after feeling that there was a problem earlier in the lap.

“I radioed in and said I felt like I had a problem so I lifted off and let the cars past,” Wall told Speedcafe.com.

“The tyre looks like it popped off the rim and turned me hard left down Conrod.

“Luckily it was just a glance against the wall. The suspension parts have taken the brunt of it but everything has done what they are supposed to do. The chassis pickup points are all fine.

“Hopefully should be in the session after the next one.”

DJR wasn’t the only team in trouble, with Team Jeld-Wen FPR also left to fix damage after a late spin at The Cutting from Cameron Waters.

Waters was one of six co-drivers to join the track in the closing stages of the session.

“The track is a bit different to the other years I’ve been here and going into The Cutting it just locked the rears and spun on me,” explained Waters.

“I managed to tag the wall which isn’t a great start to the weekend but it looks like it’s all body panels, which is a good thing.” 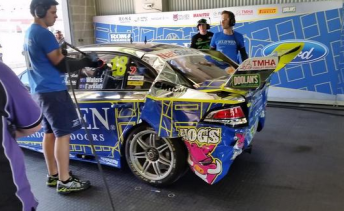 Shane van Gisbergen’s Tekno Holden meanwhile escaped damage after the Kiwi made minor contact with the fence at The Cutting.

Mostert’s 2:08.07s was set in the final minutes of the session and proved more than two seconds quicker than the fastest lap from the opening session last year.

The FPR Falcon driver had struggled for initial balance early in the going but made impressive strides as the session continued.

“Rolling it out we weren’t completely happy with the car but we were still around the top 10,” said Mostert.

“We’ve made the car better but we’ve still got a long way to go.

“I don’t think all year I’ve been P1 in a session so it’s pretty amazing to do that here.

“After coming off last year it’s pretty special. The FPR cars seem to be pretty quick which is a really good start.”

James Moffat was second quickest in an encouraging start for Nissan ahead of Garth Tander, James Courtney and David Reynolds.

Scott McLaughlin and Jamie Whincup were sixth and seventh respectively.

The Red Bull driver did not set a flying lap until the 35 minute mark after pitting on his out-lap for the team to attend to a mechanical problem.

“We had an issue with the tail shafts and we fixed it straight away,” he explained.

“Ideally you don’t want that. You want a clean run in practice but that’s life.”