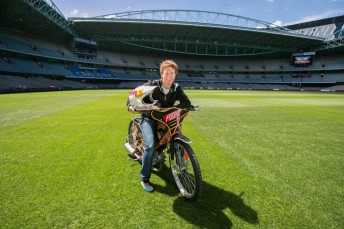 Speaking after the press conference held at the Stadium on Melbourne’s Docklands, Crump says he expects the 50,000-plus seat venue to be full come Saturday, October 24 next year.

“I’d like to think it will be a sellout,” said Crump. “I think it is a reasonable target and it would be an amazing achievement if the organisers could pull it off.

“A lot of things need to be done to make people right around Australia realise that it is on – but I guarantee that people who come to see Speedway Grand Prix in an arena like Etihad Stadium will come time and time again.”

Victorian born but Gold Coast-based Crump was named as an Australian Speedway Grand Prix ambassador, along with his fellow Mildura product and former World number two, Leigh Adams – who was also on hand today.

Crump says it places Etihad Stadium up there with other stadiums such as the Millennium Stadium in Cardiff, PARKEN Stadium in Denmark, the Veltins-Arena in Gelsenkirchen, Germany and of course the Sydney Olympic Stadium that have all hosted Speedway Grands Prix. 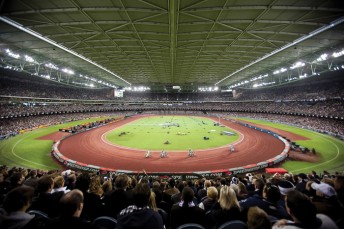 “The guys who build the (temporary) tracks now are very used to it, the tracks they deliver to the riders are now so similar to permanent tracks that have been there for 10 years,” he said.

“They build them within three to four days and within 48 hours you’d never know a Speedway Grand Prix had been held there.”

Crump promises excitement from the 16 riders – including Aussies Chris Holder and Jason Doyle – that will take to Etihad come October 24 next year.

“The noise inside the stadium I think is what will strike people the most. Four 500cc bikes racing around the track with the roof closed, it will be unbelievable.

“It is a fully charged, exciting and colourful show. Fans will be able to see the whole circuit right in front of them regardless of where they sit in the stadium.”

Chief Executive Officer of Etihad Stadium, Paul Sergeant says SGP has been on his radar for some time.

The former boss of the Millennium Stadium in Cardiff (which holds Speedway’s showpiece British Grand Prix each July) says the five year agreement is a tremendous coup for Etihad, which has held other major events such as World Wrestling Entertainment, Darts, International Cricket and its regular tenant, the AFL.

“Bringing FIM Speedway Grand Prix racing to Etihad Stadium has been on our agenda for some time and is a tremendous coup for Melbourne. We’re looking forward to an exciting five years of SGP action and are in no doubt it will become a hugely popular event,” said Sergeant.

“We’re proud to be staging and promoting the Australian FIM Speedway Grand Prix, which will be privately funded.

“The SGP series is spectacular. It’s in an easy to follow format with fast and exciting racing.”

Tickets are available from 9am Melbourne time Friday, October 10 at ticketmaster.com.au.

A full interview with Jason Crump can be heard this Sunday during ‘On The Grid’ on SEN Radio 1116AM in Melbourne from 8am AEDST.