Murphy on top as pace quickens in Practice 2

Murphy on top as pace quickens in Practice 2 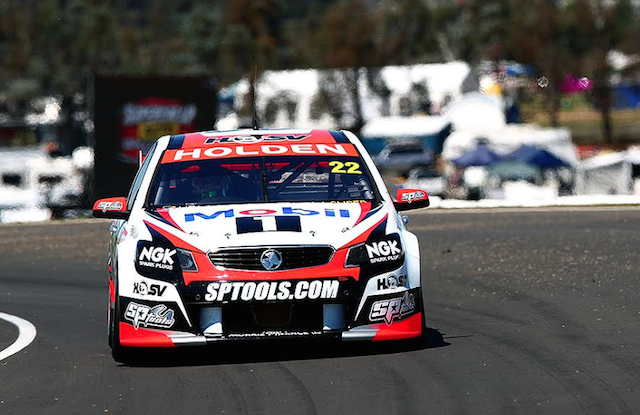 The Holden Racing Team’s Greg Murphy edged out Red Bull’s Steven Richards to the quickest time in the co-driver only second practice session at the Supercheap Auto Bathurst 1000.

The Holden rivals traded blows in the dying seconds of the 45 minute hit-out after moving to their second set of practice tyres.

A 2:08.9s effort put Murphy atop the order seconds before the chequered flag flew, but was quickly eclipsed by a 2:08.8s from Richards.

The HRT star responded by lowering the benchmark by a further 0.3s to end up a full two seconds clear of the best time from the corresponding session last year.

Murphy said post-session that all teams are having to chase the track’s increasing grip level as more rubber goes down.

“It was hairy to start this morning for James (Courtney) and I think for everyone because the track is very green,” said Murphy.

“It hasn’t got the grip yet that I think it’s going to get, but we’ve worked away at the car, stuck to our plan and improved it.

“The track has probably made the front work a bit better, which has hurt the rear,” he added of the oversteer-trend noted by many drivers today.

“I think that the track will come in by the feel of it. It just feels green with the shudder feeling it has on the road.” 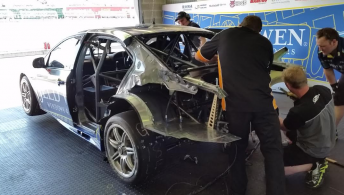 Work continued on the Jeld-Wen, pictured, and DJR Falcons throughout the session

The performance marked a mixed outing for the HRT as its other co-driver, Warren Luff, was garage-bound for much of the session due to a mechanical problem.

“We had a driveline issue so we had to stop and diagnose what it was,” said Luff.

“The guys fixed what they thought it was but something else wasn’t right so we missed out on a lot of miles, but that’s Bathurst.”

The David Wall/Steven Johnson Dick Johnson Racing and Jack Perkins/Cameron Waters Falcons both missed Practice 2 after their accidents during the morning.

The Robert Dahlgren/Greg Ritter Volvo meanwhile did not appear until the final two minutes as it underwent an unscheduled engine change.

The 19-year-old managed to return the wildcard entry to the pitlane undamaged.

The day’s third and final practice session will get underway from 1510 local time.