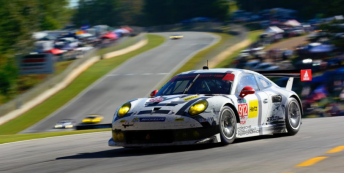 The New Zealander, who was drafted in to join the works Porsche outfit for the 10 hour classic at Road Atlanta, quickly adapted to the demands of endurance racing.

The Porsche International Cup Scholarship winner impressed throughout the race helping the #912 car he shared with American ace Patrick Long and Michael Christensen to second in the GTLM class.

Wolf Henzler, Bryan Sellers and Marco Holzer took the class honours in the privateer Falken Porsche taking the flag just a second ahead of the factory outfit.

“To get the chance to contest this race with the 911 RSR and then climb the podium was a fantastic experience,” said Bamber.

The trio finished ahead of the Action Express Corvette DP of Joao Barbosa, Christian Fittipaldi and Sebastien Bourdais, who were crowned the inaugural United SportsCar champions.

Fellow Aussie James Davison finished 10th in the GTD class after an electrical issue plagued the TRG Aston Martin he took to a fourth pole position of the year in qualifying. The Brit made the most of a his pole position for the reversed grid race leading every lap of the 26 lap contest.

Former British Touring Car ace Tom Chilton converted a maiden WTCC pole position into victory in race one as he held off the Citroen pair of Yvan Muller and Lopez.