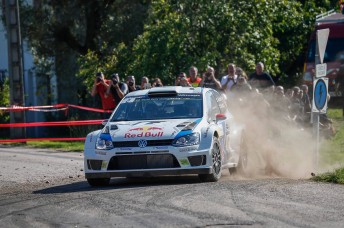 Latvala has now won on asphalt

Jari-Matti Latvala has won the Rallye de France to score what was his first career win on asphalt in the World Rally Championship.

Despite the WRC being dominated by Finnish drivers it was the first victory for a driver from that country since Tommi Makinen in 1999 in San Remo (Italy).

The 12th WRC win for Latvala was a dominant affair after World Champion and team-mate Sebastien Ogier suffered issues on the opening day. It ensured the fight for the drivers’ title continues to the penultimate round in Spain later this month.

After leading on the tarmac in Germany and crashing on the final morning, Latvala made no mistakes in France to lead for all but one of the 18 special stages in a Polo R to win by 44.8sec.

“I was pretty nervous this morning after my mistake in Germany. I had to take that lesson and without that experience I wouldn’t have been able to be as strong today and have belief in myself,” said Latvala.

“I’ve been waiting a long time to win on asphalt and done a lot of work for that and now it has finally come. I’ve been able to take some big steps this year and this is one of the most important,”

Team-mate Andreas Mikkelsen matched Latvala during the first day and led briefly, but settled for second for the third time this year. Kris Meeke was 20.5sec behind in third, taking his fourth podium of the season in a Citroen DS3.

Robert Kubica was on course for a career-best fourth after demoting Dani Sordo on the final morning, but spun his Ford Fiesta RS into a ditch in the final test. Sordo secured the place, his Hyundai i20 12.0sec ahead of Mikko Hirvonen.

The mixed surface Rally de Espana is based in Salou on 23 – 26 October.