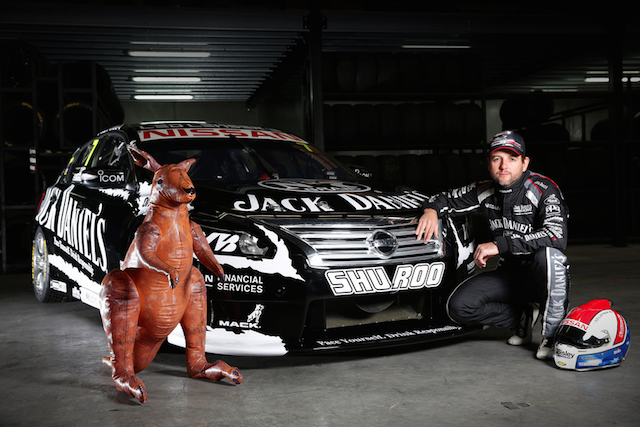 Todd Kelly’s Nissan Altima will carry signage from collision prevention specialists ShuRoo at Bathurst, a year after being taken out of the event by a kangaroo.

Kelly’s Bathurst 1000 was over after just 20 laps when a collision with a kangaroo at the exit of Griffins’ Bend damaged the #7 Altima’s front-suspension.

The incident marked the first time a V8 Supercar had hit a kangaroo in the 1000 since a similar disaster befell Jim Richards’ Perkins Holden nine years earlier.

Co-driver David Russell was at the wheel of the Nissan at the time and, remarkably, saw his Bathurst 12 Hour campaign in Roger Lago’s JBS Lamborghini fall to the same fate three months later.

“Bathurst is a unique place where you get thrown weather and all sorts of circumstances that you might not get at other rounds,” said Todd Kelly, whose car also ran ShuRoo branding at last year’s Gold Coast 600.

“Unfortunately, on lap 20 last year, we had a collision with a kangaroo and that was the end of our day.

“It did a bit of damage to the front of the car, but it pulled a critical suspension component out of the cross member which wasn’t able to be fixed in time.

“This year, we have ShuRoo on board for the big race and hopefully it doesn’t happen again.”

The 2005 Bathurst winner is teamed with Briton Alex Buncombe this season, with Russell switching to the sister Jack Daniel’s Nissan alongside Rick Kelly.

“I want to go in the record books alongside Jim Richards but not for hitting another kangaroo at Bathurst thats for sure,” said Russell, whose car will not carry the ShuRoo signage.

It is hoped that extensive fencing upgrades undertaken at Mount Panorama since last year’s race will lessen the chance of kangaroos entering the circuit.

The potential culling of kangaroos in the area has been a hot topic locally over the last 12 months, with a research program into the population and movement of the animals ongoing at the University of Technology, Sydney.