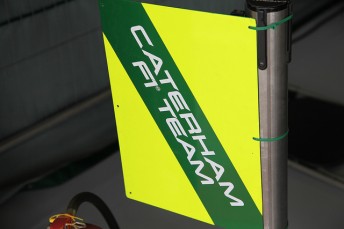 The Caterham Formula 1 team has been forced into dismissing suggestions that its place in the Japanese Grand Prix field is under a cloud.

Extraordinary claims surfaced that goods, including parts set to be used at Suzuka, were taken by authorities from its Leafield team base.

The Sheriff’s Office has since published the list of goods online which include but are not limited to:

“We can confirm the goods have been removed from the Leafield enforcement address and are in secure storage,” The Sheriff’s Office said.

The seized goods will be put up for sale at a yet to be determined date and location in the UK.

Caterham has been under a cloud since its sale to a group of Swiss and Middle Eastern investors in July.

In response to the seized items from Leafield, Caterham put out a three-line statement.

“There have been unfounded and unsubstantiated rumours concerning actions against 1MRT, the entrant and owner of CaterhamF1,” the statement read.

“An action was threatened yesterday against a supplier company to 1MRT. This company is not owned by 1MRT and it has no influence over the entry of CaterhamF1 or the entrant.

“Also contrary to uncontrolled rumours, all operations are currently in place at Leafield and the race team is doing its preparation in Japan.”