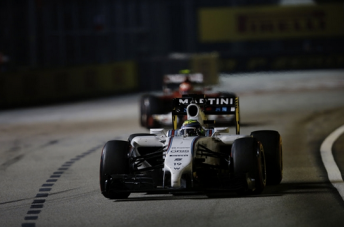 Williams is relying on fresh bodykit upgrades to shore up its solid position in the constructor’s championship ahead of the Japanese F1 Grand Prix this weekend.

The new aero improvements come at a crucial time as Ferrari came out with a much improved package at the recent Singapore night race.

Suzuka is technically demanding, undulating and has a blend of corners which rely on downforce and accurate set-up to extract a decent lap time.

Driver Felipe Massa recorded a fighting fifth place at Singapore which helped Williams maintain a slender edge over Ferrari in the constructor’s battle.

Performance Engineering head Rob Smedley is particularly buoyant ahead of the downforce improvements and the work on extending the tyre life for Massa and team-mate Valtteri Bottas.

“Japan is one of the last remaining old school tracks. It is incredibly important to get the cars set-up right and very difficult for the drivers to get the perfect lap,” Smedley said.

“The track is one which tests all aspects of the car and so is very tough to get right.

“Tyre management is key, so we hope we have done all of our homework and getting on top of track conditions throughout the weekend will directly affect qualifying and the race.”

Massa is confident of continuing the momentum which sees Williams third on 187 points, nine clear of Ferrari with the battle dominated by Mercedes (479).

Red Bull, largely due to the brilliant performances of Australian Daniel Ricciardo who has compiled three victories and four podiums, are second on 305 points.

“Japan is one of the best circuits on the calendar,” Massa said in a team preview.

“The first sector is amazing and the elevation changes really add to the excitement of the track. We have good momentum at the moment and our car will hopefully be better than in Singapore.”

Ferrari technical director James Allison remains upbeat after the Scuderia’s solid pace in the practice and qualifying and Fernando Alonso’s fourth place in the 60-lap race.

“We left Singapore with some satisfaction that areas we’d been working on the car, to improve its mechanical grip for example, appear to be paying off for us,” Allison said.

“So we go to Suzuka and the remaining races determined to close the gap to Williams and then try and actually pull ahead of them, with the aim of securing a third place in the championship.”