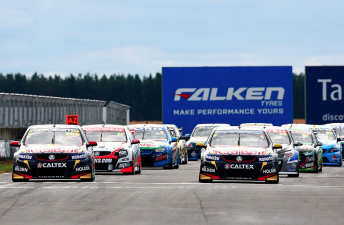 V8 Supercars will sharpen its Super Sprint format in 2015

The V8 Supercars Championship will feature shorter Super Sprint races next season as the category aims to spice up its Saturday scheduling.

This year the eight Super Sprint events comprise a pair of 100km heats on Saturday and a single 200km race on Sunday.

The V8 Supercars Commission has reviewed the event formats and is expected to cut as much as 40km from each of the Saturday sprints.

The move will be made to encourage harder racing following concerns that too much of the 100km races are spent with drivers conserving tyres.

Outside of the abrasive Barbagallo, each of the 100km heats have run without pitstops for the leading runners, with six of those 12 races seeing the winner lead every lap.

Holding a pair of 60km Saturday heats would mimic the format seen in 2013, albeit this time with two standings starts and points awarded at the end of both races.

The sharpening of the Saturday races will likely coincide with a compacting of the V8 Supercars session scheduling on race weekends.

While support category action will still be spread throughout each day and broadcast on Fox Sports, the V8 sessions are expected to be brought closer together in order to better retain the afternoon television audience.

Television scheduling will also dictate a halting of V8 Supercars’ twilight racing ambitions, with recent evening experiments at the Adelaide and Sydney 500s set to be scrapped.

The release of the 2015 V8 Supercars calendar at Sandown confirmed that the Super Sprint will return to all eight events next year.

Any tweaks to the formats and the corresponding tyre allocation are not expected to be announced until after the current season has been completed.

Tyre formats for the events continue to be debated, with the category working to further reduce the allocation in order to save money for its teams.

The possibility of scaling back to exclusive use of the hard tyre is known to have been discussed as part of the push, but is thought unlikely to get the green-light.

Contrasting the marginal increase in cost of using the higher wearing tyres, the soft rubber is widely regarded as producing better racing than its counterpart.

The desire to further cut the tyre allocation will however likely scuttle any chance of a softer compound tyre introduced in 2015.

Although the tyres are understood to have arrived in Australia in late July, it is yet to be confirmed when, or if, they will be given to teams for track testing.