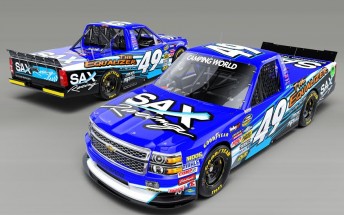 Brisbane firm SAX Suspension Technology was named as backer of Roo Motorsports which intends to run in the NASCAR Camping World Series in 2015.

Believed to be a multi-million dollar effort over three years, Roo Motorsports will become the first Australian-owned NASCAR team.

The team has signed Australian Scott Saunders who has been living in the US since 2008 as its driver for the ambitious project.

Roo Motorsports announced the project simultaneously with unveilings in Brisbane and North Carolina.

The team will be based in the heart of NASCAR country at Salisbury in Charlotte.

Saunders will follow in the footsteps of Australia’s first full-time NASCAR driver Marcos Ambrose who started in the truck series in 2006 before graduating to the second tier Nationwide level and then making it to the main Sprint Cup competition.

“The reception from the local community has been outstanding – many thanks to Salisbury and Rowan County for making us welcome,” Saunders said.

His dad, team founder Noel Saunders said: “Roo Motorsports is excited to have Sax suspension join the team. We look forward to working with them over the coming years and in assisting them to make their product a household name.”