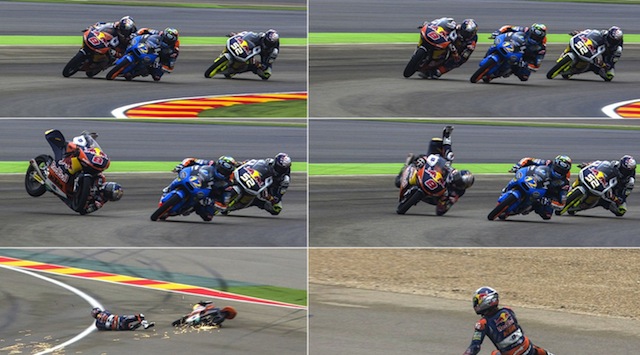 Miller and Marquez collide at Aragon

Australian star Jack Miller has lost his Moto3 championship lead as result of a controversial clash with title rival Alex Marquez at Aragon.

The Townsville teenager, who will graduate to MotoGP next season with LCR Honda, collided with Marquez while fighting for the lead at the early stages.

As a result, Miller was pitched into the air and thrown from his bike while Marquez was able to continue to fight at the front. The incident was scheduled to be investigated by Race Direction.

Marquez eventually came home in second having been beaten to the chequered flag by Romano Fenati, while Miller finished in a lowly 27th position.

The accident saw Miller’s nine point championship lead evaporate as Marquez’s second place presented him with an 11 point advantage at the top of the standings.

“In the crash, Marquez had tried to overtake me on the straight but did not have the pace to do so,” said Miller.

“On the entry to the corner I was on the dry line and went in normally.

“I knew Marquez would try to block off inside corner, but he did not cut the gas and made me fall off the bike.

Miller will head to Japan’s Motegi circuit for the next round of the championship on October 12.