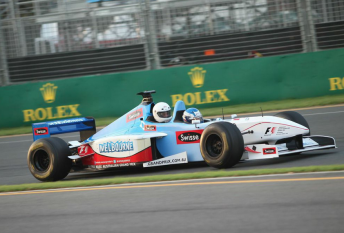 The F1 two-seater at Albert Park

As revealed earlier this month, the Australian Grand Prix Corporation is bringing the ride car to the famed Mount Panorama circuit for the first time, undertaking a number of 15 minute sessions throughout the weekend.

Davison, who tested a single-seater Minardi F1 car in Italy late in 2004 before returning home to race V8 Supercars, will drive on Thursday and then hand the controls to the Hungarian.

The Thursday running will include a hot lap for Network Seven personality Mark Beretta.

“What an awesome opportunity, to combine two of the biggest milestones of my motor racing career into one experience, driving a Formula One car again and doing it at Bathurst,” said Davison of the plan.

“When V8 Supercars and the AGPC announced that the Swisse Two-Seater was going to be at Bathurst this year, I was really excited and then absolutely delighted to have the chance to drive it.

“To take Beretts (Mark Beretta) on a lap of Bathurst neither of us will ever forget, it’s going to be enormous fun.

“I tested for Minardi some years ago when I was racing in Europe and it remains a career highlight for me, right up there with winning the Bathurst 1000 in 2009.”

Baumgartner, who raced 20 grands prix for Minardi across the 2003/04 seasons, is a regular with the two-seat F1 program, previously driving the car at Albert Park.

The joint promotion between V8 Supercars and the AGPC comes amid ongoing discussions over the touring car class’s ability to make Albert Park a championship event.

AGPC CEO Andrew Westacott made a brief appearance at the Wilson Security Sandown 500, where V8 Supercars’ 2015 calendar was announced, once again flagging Albert Park as non-championship.

While V8 Supercars’ move to Ten next year has brought the push for points to the forefront, its fate will ultimately rest on whether Fox Sports is granted rights to broadcast the V8 sessions.