Fore and Thonon to race on the Gold Coast

Fore and Thonon to race on the Gold Coast 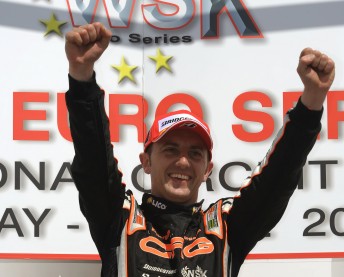 Arguably the biggest name in world karting, Davide Fore is one of two superstar additions to the Race of Stars, to be held on the Gold Coast come October 18.

The 40-year-old Italian has five World Championships to his credit and will return to Australia for the Race of Stars – to be held at the Xtreme Karting facility at Pimpama, just north of the glitter strip.

It will be the first time in almost 20 years that Fore has raced in Australia, after last competing here at the Oceania Championships, finishing third in the now defunct Formula A category. Since that time, he has gone on to become arguably the biggest name in world karting.

He will be joined by Belgian Jonathon Thonon. One of the hottest properties in world karting at the moment, 27-year-old Thonon has three World Championships and two European Championships to his credit.

Fore – a former team-mate of Holden Racing Team V8 Supercar driver, James Courtney in Europe – will line-up for the CRG Australia factory squad in the KZ2 gearbox category, whilst Thonon will join forces with the Praga factory team in a stacked KZ2 field.

“Its been a long time since I have been to Australia and I have never been to the Gold Coast, I am really looking forward to getting over there and racing against Australia’s best. The idea of getting a surfing lesson sounds great and I am hoping to get a bit of sun as well,” said Forè.

Thonon – who has raced against a number of Australian KZ2 front-runners at the Las Vegas SuperNats over the years – is looking forward to connecting with the IPKarting team on the Gold Coast for the Race of Stars. 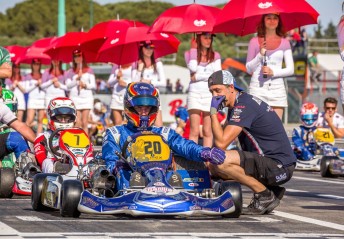 3-time World Champion, Jonathon Thonon will join Fore for the Race of Stars

“I have never visited Australia before and I am very happy to come for this short visit,” he said. “The Gold Coast looks like a fantastic place for exciting times and action.  I will enjoy the sunshine before returning to Europe for the cold of winter.”

Last year, the Race of Stars – a single day, free event as part of the Castrol EDGE Gold Coast 600 V8 Superfest – attracted over 4,000 spectators to the Xtreme Karting complex. With the announcement of Fore and Thonon, that number is expected to increase come Saturday, October 18, according to organisers.

“To have Davide and Jonathan, along with several other top line European drivers, here in Australia for the Race of Stars is significant for the sport of karting in this country,” said Event Coordinator Lee Hanatschek.

“We are truly going to have a real international feel about the event with the top drivers in Australia being able to test themselves against the World’s best.

“This will be the first time in almost 20 years that Australian motorsport has hosted so many top line karting drivers from Europe.  We encourage anyone who is interested in motorsport to come take a look at the free event, and it will be a great day out for all the family.”