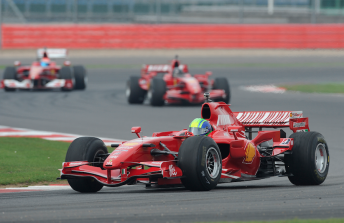 Three-car teams could be a reality in future

As a number of Formula 1 teams face a shaky future, the spectre of stronger operations moving to a three-car structure continues to be a talking point at the top level.

Following on from the idea again coming to the fore ahead of the Italian Grand Prix earlier this month, F1’s enduring ringmaster Bernie Ecclestone continued to stoke the fire at Singapore.

Ecclestone is in favour of teams moving to three cars as a measure to protect its grid numbers as the likes of Caterham, Lotus, Sauber and Marussia face uncertain times.

If F1 sees several of the aforementioned teams disappear then a three-car structure for the top squads would almost certainly come into play.

“It’s always been on the cards that if we lose up to three teams then the other teams will run three cars,” said Ecclestone in Singapore.

“I think we should do it anyway. I would rather see Ferrari with three cars, or any of the other top teams with three cars than having teams that are struggling.”

The waters in this direction have already been tested with an amendment to the F1 sporting regulations recently rejected by the F1 Strategy Group.

What do you think? Would you like to see F1 move to three car teams?

Have your say on the poll below.