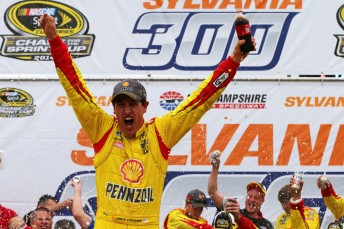 Joey Logano has scored his fourth win of the NASCAR Sprint Cup season as he took victory in a sometimes wild Sylvania 300 at New Hampshire Motor Speedway.

It now means both Team Penske drivers are through to the next phase of the Chase for the Sprint Cup.

Logano got a good jump on a green-white-chequered restart, allowing him to hold off rookie Kyle Larson to score his second win at Loudon.

“This is my home race track, the coolest place to win for me. I could never pick a better race track to win.

“I’ve got to thank all the boys at Team Penske. We’re doing what we’ve got to do to win this thing right now – both teams are – and I’m proud of that.”

Kevin Harvick, who led a race-high 104 laps (out of 303), finished third while Jamie McMurray and Jimmie Johnson rounded out the top five.

Chase leader Keselowski, who started on the pole for the fifth time this season, led 78 laps and despite spinning and bringing out one of the yellow flags, found himself in the lead over the closing 50 laps of the race. However, he faded to seventh at the finish, but still leads the standings.

Marcos Ambrose had a day of lows and highs. Starting 20th he found himself a lap down, but the succession of caution periods soon got him the “Lucky Dog” and he was back in contention. Then his team gambled on strategy calls not to pit and he found himself battling for the Top-5.

Saying that his car was pushing through the corners, Ambrose used up his tyres. The late run of yellow flags saw his team gamble with a four-tyre stop. But he was buried in the pack and went on to finish 24th.