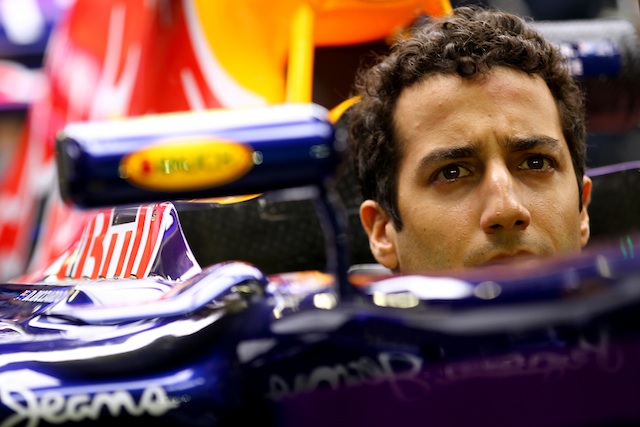 Daniel Ricciardo is confident he can challenge Mercedes

Daniel Ricciardo believes he has a realistic chance of toppling the Mercedes duo of Lewis Hamilton and Nico Rosberg in Sunday’s Singapore Grand Prix.

The Western Australian came perilously close to securing his maiden pole before Rosberg and then Hamilton took the position away from him in the closing stages of a hard fought qualifying session at the Marina Bay circuit.

Ricciardo finished just 0.173s adrift of the Mercedes pair in third with only three tenths covering the top six, leaving him feeling optimistic about his chances in the race.

Although he expected his Red Bull RB10 to challenge Mercedes in Singapore, he was surprised to be so close to the warring title contenders.

Having already defeated Mercedes in three grands prix this season, the 25-year-old is confident a smart strategy could deliver a fourth victory.

”Coming into the weekend we thought that if we could be within two or three tenths of Mercedes then there was a realistic chance to stay with them in the race,” said Ricciardo.

“We actually ended up closer to them than we thought in qualifying, so that’s good.

“If the start goes okay then it’s about trying to be smart and doing something with the strategy.

“If I can get close, then I’ll have a go, I haven’t been shy doing that this year, but it’s difficult on a street circuit.”

Elsewhere, Ferrari has confirmed a software glitch ended Kimi Raikkonen hopes of top six position in qualifying, while Rosberg claimed a change of brakes was the reason he missed out on pole position by seven thousandths of a second to rival Hamilton.