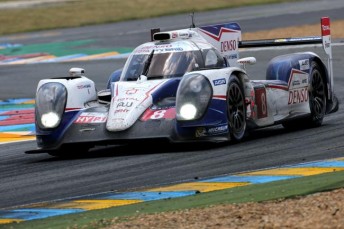 Toyota has resumed its World Endurance Championship assault by spearing to pole position for the 6 Hours at the Circuit of the Americas at Austin, Texas.

Sebastien Buemi guided the #8 Toyota TS040 Hybrid to the fastest time in a session which saw officials crackdown on teams exceeding fuel and energy limits.

Sharing the qualifying duties with Anthony Davidson, Buemi saw off challenges to post a 1:49.091s average.

It was the third pole of the season for Davidson, Buemi and Nicolas Lapierre who head the points standings on 80 going into the fourth round of the WEC.

The Porsche #14 919 Hybrid, qualified by Neel Jani and Romain Dumas, will start from second after a 1:50.283 average while Kiwi Brendon Hartley and Australian Mark Webber combined to see the #20 919 finish the session third best.

Jani had one of his laps erased after surpassing his fuel consumption limit during individual laps.

“It was a good team effort to put the cars second and third on the grid,” said Webber.

“Due to changing weather conditions, it was a compromised weekend in terms of set-up for everyone. In qualifying the conditions were extremely favourable for us, as it was a little cooler, and we made the most of it.

“However, I regard qualifying as only 0.5 per cent of the job, the main task is the six-hour race tomorrow.”

It was a horror session for the Audi Sport runners with the #1 R18 e-tron quattro diesel driven by Lucas di Grassi and Loic Duval suffer software problems which saw the car shuffled to sixth after it too had exceeded fuel consumption limits.

The Le Mans-winning Audi of Marcel Fassler, Benoit Treluyer and Andre Lotterer, second on the points standings on 60, will start from fourth.

In LMGTE PRO, Gimmi Bruni and Toni Vilander are on pole in their AF Corse Ferrari 458 Italia while

Porsche claimed top spot in the LMGTE AM with Emmanuel Collard, Matthieu Vaxiviere and Francois Perrodo fighting off Aston Martin and Ferrari in the Prospeed 911 RSR.