IndyCar Series returns to Brazil in 2015

IndyCar Series returns to Brazil in 2015 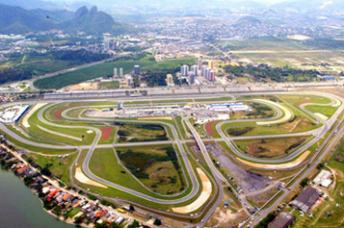 Brasilia will join the IndyCar schedule in 2015

The IndyCar Series has added another new venue to its 2015 schedule with the addition of the Autodromo Internacional Nelson Piquet in the capital of Brasilia.

Joining the calendar on March 8, the Brasilia race comes after IndyCar enjoyed two spells in the South American country in Rio de Janeiro from 1996-2000 and the Sao Paulo street track from 2010-2013.

Confirmation of the new race was made by Mark Miles, chief executive of IndyCar parent company Hulman & Company and Maruska Souza Holanda, the president of Terracap, the government-run company which owns the circuit.

“We’re eager to continue IndyCar’s rich history of racing in Brazil with today’s announcement of a Verizon IndyCar Series event in Brasília next season,” Miles said.

“This event is an instrumental step in the growth of IndyCar as we continue to execute our strategy of adding race markets and events that drive us forward.”

The 5.476km circuit was established in 1974, bringing a non-championship F1 race to Brasilia in the same year a week after the Brazilian World Championship GP at Interlagos.

“I look forward to having the race in Brasília; it will be a marvellous event not only for developing Brasília but for all of Brazil,” Brasília Governor Agnelo Queiroz.

“The racetrack is located close to downtown and we expect more than 100,000 fans at the event.”

Helio Castroneves, runner-up in the 2014 championship to Penske team-mate Will Power, and fellow Brazilian Tony Kanaan (Chip Ganassi) were both looking forward to racing back in their country of origin.

“The fans there love IndyCar and support the race and we also have Brazilian sponsors involved in our sport, so racing in my home country is a no-brainer,” Kanaan said.

Castroneves said: “The World Cup was there a few months ago. The Olympics are coming to Rio de Janeiro in 2016. In between we will see the return of the Verizon IndyCar Series beginning in 2015.”

The announcement comes after confirmation that IndyCar will venture to New Orleans for the first time with NOLA Motorsports Park joining the series.

The full 2015 schedule is expected to be announced later in the off-season.