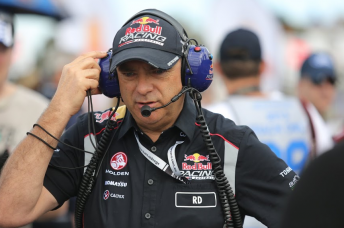 Triple Eight Race Engineering owner Roland Dane says he had to jettison plans to field a factory Bathurst 12 Hour effort over the much vaunted date clash with the official V8 Supercars pre-season test.

Dane told Speedcafe.com that he had an opportunity to field an international effort with an undisclosed marque at Bathurst but had to abort the plan when V8 Supercars angled for the February 7-8 date.

“We had to turn it down because absolutely the priority is V8 Supercars,” Dane said.

When pressed for further details of the GT3 squad including the identity of the manufacturer, Dane declined, although he confirmed that it was a separate concern to the Triple Eight UK BMW effort.

Despite having to turn down a tidy commercial entry, Dane said he is 110 percent committed to V8 Supercars.

“I suspect financially I had more to lose than anyone,” the Brisbane-based team owner said.

“But there is no debate over it from our point of view; there’s no contest.

“We are first and foremost a V8 Supercar team and that is where we will be concentrating all our efforts.”

While drivers including Triple Eight star Craig Lowndes are now resigned to missing the 12 Hour, Nissan remains in talks with V8 Supercars over its desire to see Rick Kelly in its Nismo GT-R.

V8 Supercars maintains it was forced into running its Sydney Motorsport Park test earlier in February based on the timing of big sporting events including the one-day cricket World Cup.

The proposed integration of the two events on the one-weekend would have seen both controlled by V8 Supercars and shown on Fox Sports.

Instead the V8 test will be on Fox while the Bathurst 12 Hour will be broadcast on Network Seven, which will air its first domestic motorsport event after its V8 contract ends later this year.

“They were certainly actively discussing with the 12 Hour management ways of trying to allow both events to take place within a very crowded calendar at that time of year and co-exist,” Dane said.

“Clearly that didn’t happen and our priorities are 110 percent with V8 Supercars and that’s where we will be.”