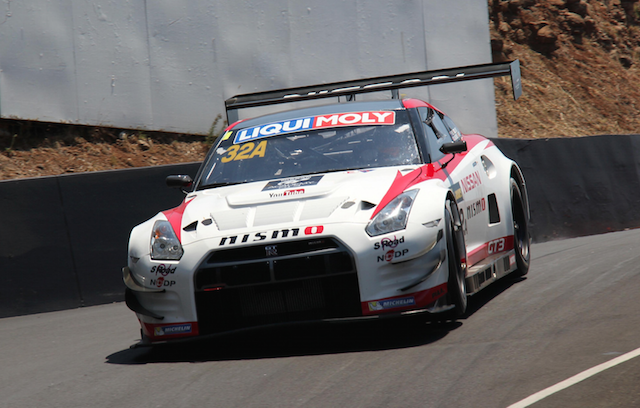 V8 Supercars is maintaining a hard line against its drivers participating in next February’s Bathurst 12 Hour, despite pleas from Nissan Australia CEO Richard Emery.

Nissan has been caught in the firing line amid V8 Supercars’ apparent war against the GT event, which has seen the touring car class schedule its Sydney Motorsport Park pre-season test on the same February 7-8 weekend.

The clash, which has included V8 Supercars extending its test from one to two days for the first time, was officially confirmed with the category’s calendar announcement at the weekend’s Wilson Security Sandown 500.

While drivers such as Craig Lowndes and Shane van Gisbergen have had to abandon their Bathurst hopes in line with their V8 Supercars commitments, Nissan is steadfast in its desire to have Rick Kelly in the GT race.

Next year will mark Nissan’s second assault on the 12 Hour with its factory Nismo GT-R GT3.

The Nissan Motorsport V8 Supercars outfit supplied five staff, including driver Kelly, and a transporter to help the Japanese outfit this year.

The date clash ensures that Nismo will have to fly in additional personnel and equipment to cover the shortfall and appears to have scuttled efforts to add a second GT-R to the operation, which would have seen up to three of its V8 stars attack the race.

“We’re a unique circumstance because we have a factory operation in both races,” explained Emery.

“The GT3 guys at Nismo are coming back. They were pretty shattered last year and have some unfinished business at Bathurst.

“Clearly as part of that global driver exchange program they want Rick to drive, if not more of them (the Nissan V8 Supercars drivers).

“We’re unique because of our involvement in both events, so we’ll be having a conversation with V8 Supercars about how it might work for us.

“I’ve spoke to Darren Cox and I won’t say what language he used, but he basically asked ‘how did it come to this’?” said Emery.

“It’s just added some complexity and cost for him that he’d rather not have.”

Emery met with V8 Supercars CEO James Warburton at Sandown to discuss the situation, but left dissatisfied and says he will now take up the matter in writing.

“We’ve made our position pretty clear,” Warburton explained to Speedcafe.com.

“The REC holders and the teams we deal with are the fabric of our sport and will ultimately determine what happens.

“But the teams have commitments to their commercial partners and are shareholders in our business.

“There have been a lot of discussions and we explained to all parties some time ago that we expect their full support.”

Just what sanction V8 Supercars could place on Nissan Motorsport or Kelly for any non-appearance in Sydney is unclear.

While the test is now being treated as a championship event for administrative and media rights purposes, compulsory attendance at events is linked to the appearance of an entry under each Racing Entitlements Contract, rather than the driver.

Pressing the issue meanwhile risks upsetting Nissan, which is one of just three manufacturers currently committed to V8 Supercars beyond the end of this season.

V8 Supercars was met with heavy criticism on social media in the wake of its calendar announcement as fans expressed outrage over the date clash.

Van Gisbergen also chimed in on Twitter lamenting the “politics” of the situation in a post that he was later instructed to delete.

A subsequent article on the V8 Supercars website stressed that the category, forced into committing to the February 7-8 weekend by the timing of other tennis, soccer and cricket events, had offered to combine its pre-season test with the 12 Hour meeting.

“Organisers chose to reject the offer of combining the two events and full television coverage, creating an impasse,” stated the article.

While V8 Supercars’ solution would have seen the 12 Hour coverage controlled by V8 Media and broadcast on Fox Sports, the GT event will instead be shown on Network Seven.

The Seven broadcast will therefore go directly up against Fox Sport’s Sunday coverage of the Sydney test, creating a potentially embarrassing ratings comparison for V8 Supercars on the debut weekend for the championship’s Fox/Ten media rights deal.