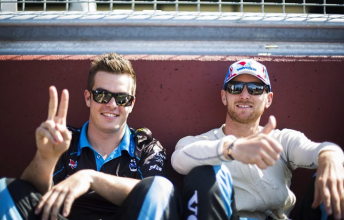 McLaughlin and Premat at Sandown

Frenchman Alexandre Premat hopes that a starring performance in the Wilson Security Sandown 500 has helped cement his future as a regular Pirtek Enduro Cup co-driver.

Sandown marked Premat’s first competitive outing in a V8 Supercar since being dropped by Garry Rogers Motorsport’s #34 entry amid its shift to Volvo ahead of the 2014 season.

After two mixed full-time years with the squad, Premat made way for Swedish Polestar mainstay Robert Dahlgren, who has subsequently endured a torrid season.

Combining a Pirtek Enduro Cup co-driver role with European racing, which has this season consisted of limited outings in the Blancpain Endurance Series, is considered an ideal scenario.

“I would like to come every year as a co-driver, together with some racing in Europe,” Premat told Speedcafe.com before jetting back to Europe for this weekend’s Nurburgring 1000, where he’ll drive an ART McLaren.

“If someone pushed really hard to have me back, sure, but I won’t push as hard (for a seat) as maybe the first time.

“I think I can be a really solid co-driver. I think in Bathurst, top three, we will be there.”

He finished the following day’s co-driver race in fourth before holding his own in the top five during the opening stages of Sunday’s 500.

A Safety Car-induced pitstop cycle at just over one-quarter distance proved disastrous, however, as Premat found his pit exit blocked by Oliver Gavin’s Holden, which was in turn waiting behind team-mate Tim Slade to take service.

“It was very disappointing that the result wasn’t our true speed,” Premat reflected.

“We should have finished on the podium. When I see that HRT number two, (third placed finishers Garth) Tander and (Warren) Luff, we were all the time in front of them.

“I was just stuck in the pitlane. I wanted to get out but I just couldn’t. I was stuck and we lost 23 seconds.

“I tried to push him once or twice but I think it would have been worse if I pushed him any more. I would have spun his car to the pitlane or something like that.

“It could have broken the splitter or damaged the front-rend, which would have been worse.

Premat recovered strongly during the following stint before McLaughlin drove the car home to eighth.

“We had good speed, good pace and after that made a lot of good manoeuvres,” Premat said

“I had to be aggressive but I think I was pretty smart. I did the job.

“But now my focus is just on Bathurst because I think we are pairing very well in that car.

“We are really looking forward to that race.”

McLaughlin has high praise for Premat and is also enthusiastic about the duo’s Bathurst chances.

“Alex did an absolutely amazing job; he deserves a spot in the main game, he’s just unbelievable,” enthused McLaughlin.

“He was just all class. Aggressive but not too aggressive. He made the moves when he needed to.

“We had a fast car, it’s a lot better over a distance now and we’re really, really looking forward to Bathurst.”