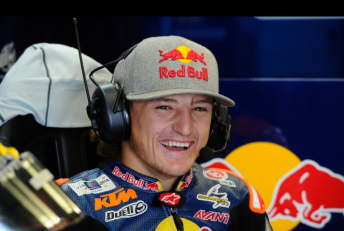 Jack Miller’s leap into the MotoGP World Championship next season is finally official, with Honda confirming a three-year deal for the Australian teenager.

The agreement will see Miller spend the next two seasons at satellite squad LCR Honda.

LCR will run a production-specification RCV1000R for Miller next season alongside the RC213V of fellow new recruit Cal Crutchlow.

The LCR team is owned by former rider Lucio Cecchinello and was the first MotoGP home for Casey Stoner when he entered the class in 2006.

The 19-year-old Miller has shot to stardom this year with a series of impressive rides in the Moto3 world championship, which he leads with five races remaining.

“I’m very happy to make the leap up to MotoGP next year, especially because I will do so alongside HRC,” said Miller.

“It’s a dream come true; I think that every rider would like to race at the highest level in the World Championship with a Honda,” Miller said. “It is certainly a big jump from Moto3 to MotoGP, but I am convinced that we are ready and that, step-by-step, learning every day, we can do a great job.

“It’s a fantastic opportunity and I’m very excited about starting this new stage of my career with HRC, whom I wish to thank together with CWM LCR Honda Team. I’m looking forward to working with them.

“In the meantime, I remain fully focused on this season’s Moto3 World Championship. I will have to avoid any distraction in order to fight for the title.”

“It is a three-year contract with HRC and the first two seasons with the LCR team more a school for Jack and then we will see,” he told News Ltd.

The next round of the MotoGP world championship comes at Aragon, Spain, on September 26-28.