David Sera – the Stars of Karting battle isn’t over

David Sera – the Stars of Karting battle isn’t over 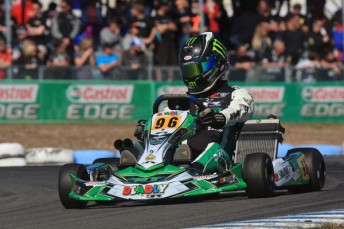 While Joey Hanssen may be in the box seat for back-to-back KZ2 Titles in the Castrol EDGE CIK Stars of Karting Championship come the end of this weekend, David Sera says the battle is far from over.

Sera, who is Australia’s most prolific kart racer of the modern era, enters this weekend’s final round at Todd Road in Melbourne 58 points shy of Hanssen in the standings. With a maximum of 125 points up for grabs across the weekend, Sera believes anything is possible.

“It’s motorsport and anything can happen. There’s still a fair bit of a gap between myself and Joey in the points but I’ll be doing everything I can to finish on a high,” said Sera.

“I haven’t got a lot to lose, so I’ll just be focusing on winning the race and hopefully the rest will take care of itself. I’ve had a lot of success at Todd Road (Port Melbourne) in my career, if I can pull this one off it will be an amazing feeling.”

While armed with the knowledge that he is in the box seat to etch his name on the John Pizarro Perpetual Trophy for the second time, Hanssen is weary of his opposition – namely Sera.

“I’m in a strong position entering the weekend but anything can still happen. I still have to be right on top of my game and push as hard as possible to make sure I win the Championship,” said the 23-year-old Dutchman.

“I won’t be going out there just chasing the Championship either, I want to seal it with a win. This weekend is likely to be my final race in Australia before focusing on racing in Europe during 2015, so I really want to win it.”

The chase for the James Courtney perpetual trophy in the KF2 class is significantly closer with only seven points separating Bundberg driver Troy Loeskow and Scuderia PCR Australia’s Nathan Tigani a top of the standings.

Sydney-sider Jayden Ojeda leads the way in the KF3 class entering the final round with a handy 42-points separating him and Darwin’s Bryce Fullwood in the battle for the Jon Targett Perpetual Trophy.

Practice begins on Friday ahead of qualifying and heat races on Saturday. The Finals will be streamed live and exclusive on www.speedcafe.com/kartinglive throughout Sunday.