Dick Johnson tells Speedcafe.com’s Stefan Bartholomaeus about a year of trials and tribulations that led to the landmark Penske partnership, and looks ahead to what the new-look team can achieve in 2015

SPEEDCAFE: Dick, this has been a long process, with a fair bit of it played out in public. Is it a relief to finally have it done?

DICK JOHNSON: It is mate. I’ve felt like an expectant father for the last 12 months and it only takes nine to have a baby!

SPEEDCAFE: As you’ve announced, this is a partnership with 49 percent of the new entity owned by DJR. Did you ever think about stepping out completely during this process?

JOHNSON: Absolutely not. Not at all. I’ll still be around and in exactly the same role as I’ve been to this point in time.

If anything this has probably put more energy into my step than I’ve had for quite some time. And I’m talking years, rather than weeks or months.

SPEEDCAFE: Let’s go back to November last year. Roger had reached out and offered to fly yourself, Ryan Story, Steve Brabeck and Campbell Little to the US in his jet.

What were your expectations at that point and what did you see while you were over there?

JOHNSON: Those sort of things are always a bit surreal because you never know what to expect when you get there.

For them it was a bit of a mission to have a bit of a meet and greet to say ‘are these guys for real or are they kidding themselves?’

At the end of the day I think things went reasonably well over there and when we saw what they had to offer it was very hard to walk away and say we don’t want to be part of it, because it’s pretty spectacular when you see the operation they have.

I knew the scale that the NASCAR guys work on, but when you see the NASCAR, IndyCar and other programs all there, it was significantly bigger than anything I’d seen in the past, including Hendrick’s operation (Hendrick Motorsports NASCAR team).

SPEEDCAFE: And dealing with Roger? I know you only met him face-to-face a couple of times during the process, but what were your impressions of him?

JOHNSON: The thing that I appreciate more than anything with Roger is that what he says, he does. He’s straight up front with everything and you’re always going to get an honest answer.

That’s the way we’ve always been too. Dealing with people like that is never ever a problem. It’s always a two-way street.

SPEEDCAFE: I understand that during your last meeting with Roger, you treated him and Tim Cindric to a lavish lunch at McDonald’s on the highway near your workshop…

JOHNSON: (Laughs). He came over and saw the workshop and when I asked him what we should do for lunch he said ‘I see there’s a McDonald’s up the road there so that suits me fine’. He obviously likes McDonald’s.

SPEEDCAFE: Legend also has it that a fellow customer was very excited to get their photo taken with you, but Roger and Tim went completely unnoticed….

JOHNSON: When a fan asks for an autograph I always try and oblige!

SPEEDCAFE: There are a couple of other teams in that part of the world. Were you afraid that the Erebus or Tekno boys were going to walk in and work out what was going on?

JOHNSON: It was a Saturday so I thought we’d be half alright, but obviously there are eyes everywhere these days and with social media around it doesn’t take long to get everything happening!

But that was a big day. Tim had been here all week and Roger turned up that morning and was with us until sundown.

From that point on we felt as though we had a chance of coming to an arrangement that’d get it all over the line.

Thankfully we’re in a situation now where we can breathe easy and just hopefully head in the right direction, which I know damn well we will.

There’s all the makings there now of a team that can get back to the front of the competition again. 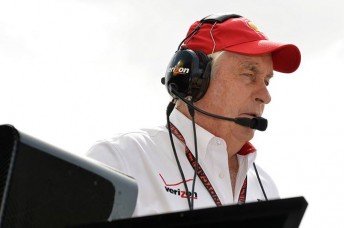 SPEEDCAFE: Roger has said that he’d decided to pull the pin the following month amid controversy over sending a test car to America. Did you think you would lose the deal out of that?

JOHNSON: Well, when those situations arise it’s always difficult because it was certainly something that was well and truly in the regulations of V8 Supercars.

But rather than rock any boats they (Penske) decided that they wouldn’t send the car anywhere and I think that was a good decision on their part.

The last thing they want is bad publicity. It wouldn’t have been good for anyone.

For us, it just points out that with Penske coming out here one has to say that it’s got a few people a bit rattled.

SPEEDCAFE: I guess it was an early opportunity for Roger and Tim to see how the category works politically, shall we say.

JOHNSON: That’s something for them to answer, but quite frankly I know that when we went over there, Tim had read the rules inside out and back to front.

They were well aware of anything that might rear its ugly head at that point in time. They’re smart enough to know what sort of people they’re working with.

SPEEDCAFE: It’s been suggested that by the time you had your first meeting Tim knew more about the rules and how the category works than most people currently in the sport. Is that a fair comment?

JOHNSON: It’s a very fair comment. You don’t get to where these people are in life without doing their own research.

They knew damn well where they wanted to be from day one. It was just a matter of making all the dots line-up and, thankfully from my point of view, they did.

SPEEDCAFE: Penske will bring in a team manager and technical director, but they’ve made it clear that your team of guys will remain the core. Is that important to you?

JOHNSON: Oh, absolutely. Tim was out here for a week looking at the whole operation and how it jelled, and as you well know, it’s very difficult to find a team of people to work together cohesively, especially in this environment.

He saw that we have a good situation with our guys and hence they didn’t want to change anything. We’re pretty happy about that.

SPEEDCAFE: And from the top level, Steve Brabeck has played a big part in keeping the team alive in the really difficult times. It is this a reward for that loyalty?

JOHNSON: Knowing that it’s got a future is the main thing for everyone. They haven’t been pleasant years that we’ve had and Steve Brabeck, along with Ryan, have done a magnificent job in managing the day-to-day running of the business.

That’s been through the good bits and the bad bits and, I can honestly say, for the first time in a long time I think I’m going to get some decent sleep. 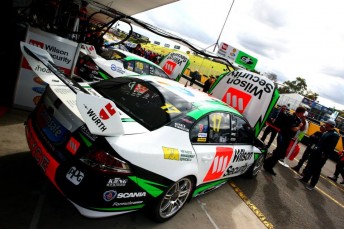 DJR had to stay afloat while the Penske saga played out

SPEEDCAFE: With your history with Ford, as well as Marcos’ and Penske’s, are you surprised that they haven’t come to the table at this point?

JOHNSON: Well, I’m sure that there are ongoing conversations to happen with Ford.

They (Ford Australia) posted something on their website (Facebook) when they found out that Marcos was coming back, but it’s a little bit tongue-in-cheek.

You can only look at it and hope that they see value in what we’re doing because I can see a hell of a future in the whole deal.

But Ford are Ford and if they want to be a part of the operation I’d dearly love to have them onboard.

SPEEDCAFE: How big a role is Marcos Ambrose going to play in the quest to be back at the front?

JOHNSON: Obviously Marcos is the chosen member to drive the #17 car by Roger and that suits us fine.

He understands the car and the competition that’s here and quite frankly I think he’ll fit in extremely well because he knows a lot of the people that are already in the business.

He’s a very accomplished guy and irrespective of what he does he’s very focussed, like Roger is, on winning.

In saying that, I think you’ll find that it was a pretty brave call in 2005 to say that I’m throwing this all away and I’m going over to America to get into NASCAR.

To have big enough balls to do something like that and stick at it was a big thing. And he achieved an awful lot. People just don’t realise how difficult it is over there.

SPEEDCAFE: A lot of the talk to date has been about how Marcos will adapt back to the cars after so long away.

Do you think he’ll actually be able to bring more to the table having all that NASCAR experience, then he would have if he’d just stayed in V8s?

JOHNSON: I can assure you that he’s under no grand delusions that he’s going to come back here and start winning straight away.

I can honestly say that the Penske organisation is one that, from what they’ve said to us, 2015 is a year for them to explore V8 Supercars and the team and to work out what it is that they need to be a contender the year after.

SPEEDCAFE: Marcos’ entry is the big talking point right now, but is there still considerable work to do on the second car, both in terms of the driver side and also the funding side?

JOHNSON: Absolutely. That’s a work in progress at the moment that we’re currently addressing.

We’re not sure on a timeline on that at this point, but we’re working towards having a result sooner rather than later. It’s our next mission.