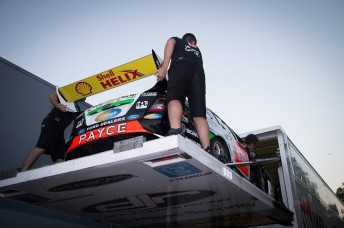 Penske is entering V8 Supercars without financial backing from Ford

Motor racing giant Roger Penske has not ruled out moving away from Ford after DJR Team Penske’s maiden V8 Supercars season, but cautions that he would need “a good deal” to switch brands.

Team Penske enjoys a strong commercial alliance with Ford through its NASCAR program, while the company has strong historical links to both Dick Johnson and Marcos Ambrose.

Penske confirmed today, however, that he has signed off on the DJR Team Penske venture with no commitment from the manufacturer.

Although the team will continue with Falcons in 2015, Penske said he’ll be looking at all options for the following season.

“Well let’s say this; I’m a businessman and if we feel that moving from one OAM (manufacturer) to another would enhance our chances to win I will look at it quite honestly,” he said.

“We have a long term relationship with Ford (in the US). They have been terrific with us in NASCAR.

“We’ve shown them the results and I think it would have to be a pretty good deal before we’d leave Ford.”

With Ford’s motorsport budgets under US control, Penske says he’s yet to speak with representatives at Ford Australia.

“Quite honestly we have not discussed commercial funding from Ford at this particular time because we hadn’t made our decision (to proceed with majority ownership of DJR),” Penske said.

“Obviously if we can proceed with marketing perspective and Marcos (Ambrose) can create some value for them I’m sure we will have some fruitful discussion.

Ford is yet to confirm an ongoing sponsorship of fellow V8 Supercars squad Ford Performance Racing for next season, leaving its FG X program currently on hold.

Team Penske president Tim Cindric says that speaking with FPR about continuing its current technical partnership is high on the list of priorities following confirmation of its V8 entry.

“It’s early days. I haven’t had the first discussion with Tim Edwards (Ford Performance Racing team principal) based on this announcement,” Cindric said.

“But that probably is one of the top five on our list of things to do here shortly.

“I think the DJR association with the FPR group is a strong one and one that I would hope would continue and hopefully get the FG X to where it needs to be.

“There’s obviously a homologation process which I’m learning about as well.

“It is one of our goals but we haven’t achieved it yet.”