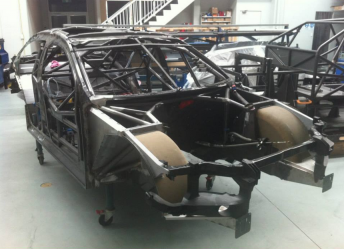 Roger Penske has revealed that he temporarily pulled the pin on Team Penske’s V8 Supercars venture after controversy erupted over plans to test a car in the United States.

During its ultimately successful negotiations to enter the category, Penske commissioned Dick Johnson Racing to construct a car to be sent to the US.

The move would have allowed Penske to utilise its extensive research and development resources to get a head start on its engineering program, as well as potentially giving driver Marcos Ambrose crucial testing miles.

According to DJR, the process was undertaken to the letter of the V8 Supercars rulebook, with control items, such as the tyres, brakes, ECU and aerodynamic bodywork left out and other parts to be sent separately to the chassis.

Having been open with V8 Supercars about the plans, Penske confirmed that he had initially received permission from the category to send the car.

While the chassis is understood to have been placed in a container by DJR staff and picked up by a third party, an aggrieved Penske called off the shipment before it was dispatched.

Tempers had flared as rumour of the chassis’ existence spread through the V8 Supercars paddock at Townsville in early July, with rival team owners angry that Penske was “not acting in the spirit of the rules”.

Regulations strictly police the testing of V8 Supercars by the category’s teams, but are unable to fully outlaw the running of unregistered chassis by non-competing organisations.

Threats that any move from Penske to take control of DJR’s Racing Entitlements Contracts would be blocked by the V8 Supercars Board if the team went ahead with sending the car left the racing great reconsidering any involvement in the championship.

“There have been some starts and stops,” Penske admitted of the negotiations to enter V8 Supercars.

“We thought earlier on that we were going to be able to get a car and have a look at it.

“The league (V8 Supercars) told us we could have that and then quickly was told after that we couldn’t have a car and bring it to the states, which was disappointing.

“In fact at one point we decided not to compete.

“But in the end with Marcos coming onboard we decided to push the green button and keep going.”

The drama proved highly stressful for DJR and its owner Dick Johnson, whose team’s discussions with Penske had stretched back to October the previous year.

While DJR initially denied the existence of the chassis as it fought to rescue the Penske deal, Johnson today spoke openly of the saga.

“When those situations arise it’s always difficult because it was certainly something that was well and truly in the regulations of V8 Supercars,” he reflected.

“But rather than rock any boats they (Penske) decided that they wouldn’t send the car anywhere and I think that was a good decision on their part.

“The last thing they want is bad publicity. It wouldn’t have been good for anyone.

“For us, it just points out that with Penske coming out here one has to say that it’s got a few people a bit rattled.”

DJR had also scrapped a planned shakedown of the test car, which was to take place at Morgan Park on the Tuesday prior to the Townsville race event.

The chassis is understood to remain in its shipping container, but could be raced by the team in future.

The arrival of Penske next season promises to shake-up the category, which has been dominated by powerhouse Triple Eight Racing Engineering for the best part of the last decade.