Latvala vows to keep Ogier in his sights

Latvala vows to keep Ogier in his sights 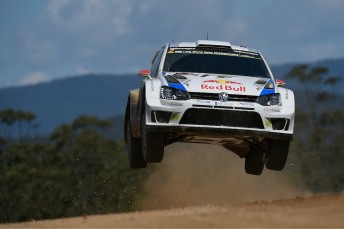 Latvala is enjoying his best season which has netted three wins and sees him 50 points behind team-mate Sebastien Ogier.

The French rally on sealed roads is round 11 of 13 with Latvala resigned to the fact that one more win would give Ogier a second straight WRC title.

However Latvala has not given up hope after pushing Ogier in a thrilling Coates Hire Rally Australia at Coffs Harbour to fall short by a mere 6.8s.

It was an inspired finish but Latvala eventually ran out of time to round up Ogier.

He concedes that opting for the wrong tyre choice on the Saturday afternoon loop cost him any chance of toppling Ogier.

“At the end of the day I managed to catch four or five seconds,” Jari-Matti Latvala told Speedcafe.com

“But I was running out of distance basically,” after going into the final day 11.8s behind Ogier.

The second-year Volkswagen factory driver says his mission is to crack his maiden tarmac win.

“I want to do a good result on tarmac. I’m really working hard to get that first tarmac victory in the WRC.

“In Germany it was in my hands and I lost it so I mean I hope we can continue to work for our target in France.”

Latvala heaped praise on Ogier who was put to the test in a rally which saw the lead change five times over the first two days.

“Seb did a really great drive on Saturday afternoon and that’s where he sealed the victory.

“I have to say that Seb was doing a really, really good drive.

“Of course I should have been closer but you never know how close with the right tyres.

“We have to be happy with this result.

“We had a good fight and we just need to get the job done next time.”