Holdsworth: My life flashed before my eyes

Holdsworth: My life flashed before my eyes 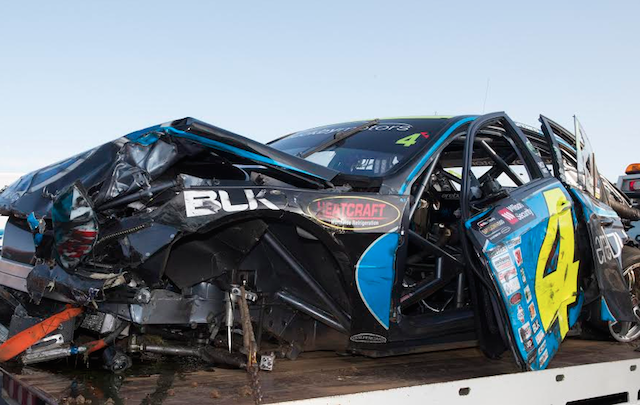 A shaken Lee Holdsworth says he was surprised to walk away from a frightening 265km/h crash during the closing stages of the Wilson Security Sandown 500.

The 31-year-old was running in 18th position when a yet-to-be-diagnosed mechanical failure in the right-rear corner of the #4 Mercedes triggered a spin at the end of the back straight.

The car slid across the grass before ploughing into the tyre wall on the outside of the circuit.

The front, left-side and rear of the Mercedes suffered heavy damage against the barrier before the car came to rest on the grass.

“It felt strange when I jumped in for my stint,” he recounted to Speedcafe.com in the Sandown paddock after being discharged from the medical centre.

“I asked if Bairdo (co-driver Craig Baird) had had any damage, but he had complained of something a bit weird in his stint too.

“The car was handling quite well so I put it behind me.

“But then in the last stint I came down that straight at full throttle and something just let go in the right-rear.

“It spat me sideways, I got the big wobble up and then I was a passenger.

“There was not much I could do other than brace myself and it seemed like I had plenty of time to think about it.

“I thought ‘I’m not going to come out of this well’. I was pretty surprised to walk away from it.

“People might think it’s bullshit, but what I did try and do when it was starting to get that wobble up was actually let it spin down through the grass.

“I knew that if it spat around to the right I’d be going in a lot earlier with a lot more speed.

“Obviously once I was on the grass I had no control at all.

“Looking at the wall coming towards me was scary.

“I honestly saw my life flash before my eyes.

“It’s the first time I’ve ever closed my eyes before an impact.

“I let go of the wheel and tried to relax so that my body wasn’t tense when the impact came.”

After the car came to rest, Holdsworth waited for medical officials to reach him before getting out of the car.

Once helped from the vehicle, Holdsworth walked unaided to the awaiting medical car.

“When I stopped I wanted to make sure it was safe before I got out,” he explained.

“I wasn’t aware straight away where I was in terms of the track, but when I saw there was grass I knew I was out of the danger zone.

“I honestly had to assess myself and see if I was ok as well. I had to catch my breath.

“I told my engineer what had happened and then was just looking down, because my ankles had copped a fair hit in the footwell and were very sore.

“I thought I might have broken one because they were so sore.”

Despite the miserable figure cut by the remains of the #4 Mercedes following the crash, Holdsworth says it could well race at Bathurst next month.

“It always looks a lot worse than what it actually is after an impact like that because you’ve got wheels and panels hanging off,” he said after initial assessments by the team and V8 Supercars technical staff.

“But I think the chassis is probably better than we expected.” 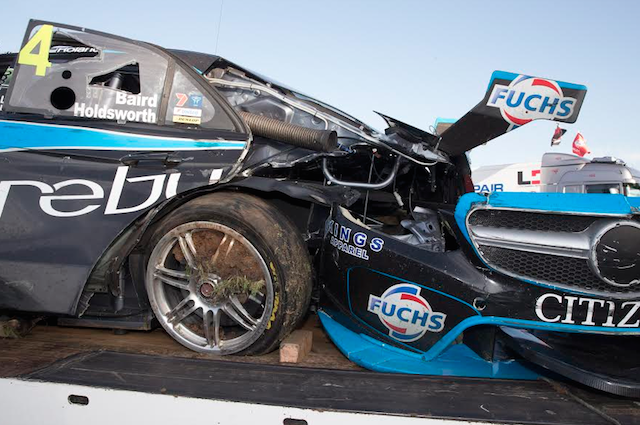 Holdsworth says he was surprised to walk away from the incident