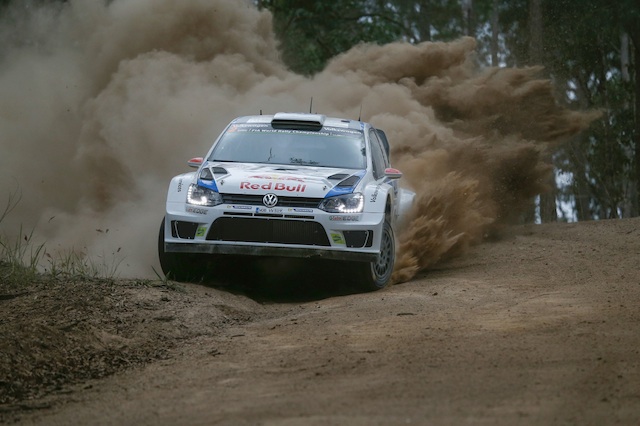 The Volkswagen driver eclipsed his world champion team-mate and overnight rally leader Sebastien Ogier to open up a 4.1s lead with his third and fourth stage victories of the event.

“I found a rhythm in there and the time came to me. In places the roads reminded me of my home in Finland.”

Rain during the night presented the drivers with a slightly damp surface for the Nambucca stage, but it didn’t halt Latvala’s charge with the Finn winning the stage by 2.6 second from Ogier.

Latvala’s charge continued when the field headed into the short 8km Valla stage. The VW man was 1.5s quicker than Ogier with Mikkelsen third and Meeke fourth with the latter escaping a brief off towards the end.

New Zealand’s Hayden Paddon remains in sixth after two solid runs through Nambucca and Valla. He remains the top Hyundai entrant but is well adrift of Hirvonen.

Meanwhile, Australia’s Chris Atkinson is in 12th spot but the Hyundai man revealed his confidence is growing behind the wheel of the i20.