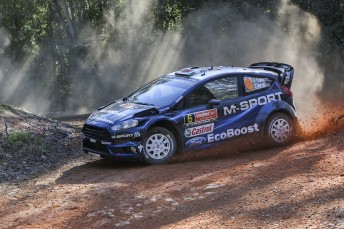 Ellyn Evans looking to step up tempo on Day two

Elfyn Evans endured a difficult baptism at Coates Hire Rally Australia but is confident of building momentum on day two of round 10 of the World Rally Championship at Coffs Harbour.

Evans, the son of legendary Brit Gwyndaf Evans, was caught in a balancing act during the first day of competition on the technically challenging gravel section south of the coastal New South Wales city.

The 25-year-old Welshman is sitting ninth overall, 90s adrift of leader Sebastien Ogier after the opening eight stages and will start third on the road.

He had battled through the opening six stages which he had not driven before at full tilt but managed to keep his M-Sport Ford Fiesta RS on the road.

Evans admitted that he was torn between pushing too hard and compromising an order to make it to the end of the 20 stages by Sunday afternoon.

“(It was) very difficult overall to be honest,” Evans told Speedcafe.com

“We haven’t had a great run in any of them (first day forest stages).

“The best run was probably SS4 but the rest has been fairly disappointing to be honest.

“We are just struggling to find a good rhythm in the car and its just not clicking together.”

Evans stipulated he has developed a strong base with which to build on, mindful of the importance of avoiding an early exit.

“There’s plenty to work on for the rest of the rally. We are here for experience.

“(confidence) is a big part of it to be honest and also the objective is to finish.

“And when you come with that objective it’s sometimes very difficult to relax and get your mind in the correct sort of place.

“But I realise its for the better the longer we do this but it would be nice if we could just relax a bit more and at least have a bit more positive time.

“I don’t know what sort of mission it will be (on day two). We are looking to build on what we’ve done today.

“I think the car will be slightly nicer so let’s see how we go.”