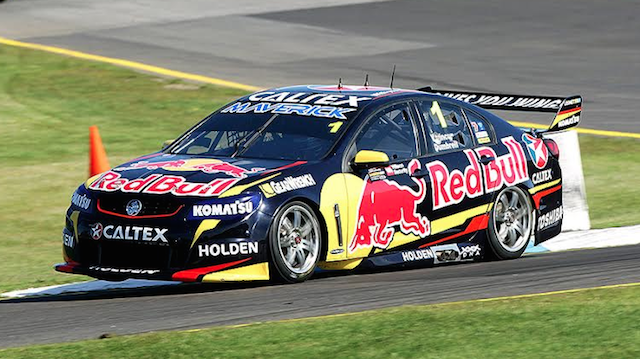 Paul Dumbrell converted pole into victory with a dominant performance in the opening qualifying race at the Wilson Security Sandown 500.

The Dunlop Series driver led each of the 20 laps from pole, eventually taking the flag almost seven seconds clear of second-placed Jonathon Webb.

Webb picked his way through the top runners after starting seventh, but could not make inroads on the Red Bull entry.

Dumbrell’s position was under question throughout the race due to a possible jump-start; an issue that the former Bathurst winner was cleared of after an investigation.

Steve Owen finished third after yielding to Webb in the closing stages, while Alexandre Premat and Greg Murphy completed the top five.

Murphy spent the majority of the 20 laps bottled up behind team-mate Warren Luff, who ran as high as third early but struggled for speed.

Murphy made his move with three laps remaining, leaving Luff to fend off Steven Richards and the remainder of the chasing pack.

Richards tapped Luff into a slide at Turn 1 on the final lap, causing a fracas that saw Tony D’Alberto take both positions while cutting through the grass at the Turn 2/3 complex.

Immediately asked by his team to redress the pass on Luff, D’Alberto cleverly backed off on the run to the chequered flag to yield the place.

Dean Canto beat Richards into eighth, while Brit Alex Buncombe starred on his V8 Supercars debut to hold onto the 10th place starting spot he inherited from Todd Kelly.

Buncombe’s only scare was an early touch from compatriot Oliver Gavin that cost the latter three places.

Chris Pither was the race’s one non-finisher after an engine failure, while a puncture ruined any chance of a result for Steven Johnson.

The results set the grid for the second sprint race, set to be contested by the primary drivers.