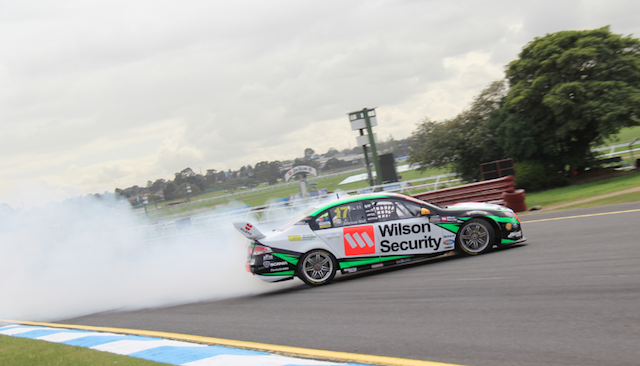 David Wall avoided the fences during this high-speed scare

The Red Bull driver bumped Holden Racing Team duo Garth Tander and James Courtney from the top of the order in the dying seconds of the 40 minute hit-out.

Whincup’s time of 1:09.19s proved 0.4s quicker than Tander’s best, which was set with just under 10 minutes remaining.

Winterbottom’s partner Steve Owen was the only co-driver to turn laps, with both of this afternoon’s 40 minute sessions solely for the part-timers.

David Wall’s #17 entry dropped an oil line on the approach to Turn 1, spinning into the run-off without damage.

Team-mate Scott Pye was next on the scene and, finding the track coated in oil, spun through the corner before making rear-on contact with the outside wall.

Although repairs to the fencing momentarily held up proceedings, Pye’s Falcon was soon back on the circuit, setting competitive times minus its rear bumper.

There was also late trouble for Dale Wood, who pulled his smoking Brad Jones Racing Holden to a stop on the circuit.

Practice 2 is scheduled for 1235 local time.