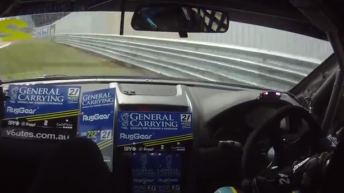 Nolan heading for the fence at high speed

A high-speed crash for Matt Nolan brought an early end to practice for Round 5 of the V8 Ute Racing Series at Sandown.

The General Carrying Racing Holden made heavy contact with the barriers at the bottom of Dandenong Road just five minutes into the second session.

Nolan escaped from the crash uninjured, while the session was cancelled as officials made repairs to the armco barrier.

Series leader Kris Walton’s time from the opening session stood as the fastest of the day ahead of fellow Ford drivers Ryal Harris and David Sieders.

Nathan Pretty was the first of the Holdens in fifth, while Jesse Dixon’s early time in Practice 2 was good enough for fifth for the day.

The Carrera Cup, Touring Car Masters and Australian GT Championship also took to the track for preliminary sessions as part of the Wilson Security Sandown 500 weekend.

CLICK HERE for more on the Carrera Cup practice

Just 1.2s covered the top 10 in an especially tight session for the classic cars.

Richard Muscat (Mercedes-Benz) recovered from a morning clash with the inside barrier at the exit of the final corner to qualify second, just 0.3s adrift.