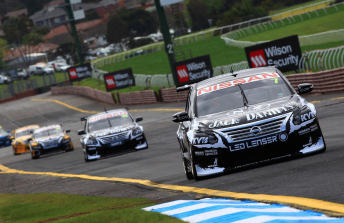 Nissan has confirmed a one-year extension to its V8 Supercars program, aligning its commitment to the timing of the sport’s upcoming technical overhaul.

The Japanese marque’s agreement with Kelly Racing now extends to the end of the 2016 season, building on the initial three-year deal started in 2013.

Nissan Australia CEO Richard Emery confirmed the move to media at the Wilson Security Sandown 500, stressing the importance of the timing.

V8 Supercars CEO James Warburton has prepared a ‘white paper’ on the sport’s future, which will be reviewed by the V8 Supercars Board.

Key points of discussion are known to include the engine formula and whether coupe bodyshapes should be allowed from 2017.

“Our commitment to the sport is now aligned to the next step or the next phase of the sport with the white paper coming into play in 2017,” said Emery.

“From our perspective it was important to make sure that our position was clear through to 2016 so we can then work with the sport and our partners for what happens in relation to the white paper and where we might sit in that.

“We’ll be reading with keen interest once the white paper comes out to see where that puts us for 2017 and beyond.”

Emery says that his knowledge of the white paper’s contents includes “only snippets at this point”.

“I put my nose in a little bit to state our position on a few things in case there was an assumption from V8 Supercars that ‘if we do this then Nissan could do that’, just to make sure where we stood on a few things,” he explained.

“It’s unlikely we’re going to have a huge change. There might be some freedom in some engine specifications, but that’s about as far as I know at this point.

“Once we see what the details are we’ll see how it impacts us or how it might affect our program.”

The development of Nissan’s VK56DE engine into a 5.0 litre V8 Supercar contender has been a major challenge for Nissan Motorsport, hampering competitiveness to date.

Emery suggests that the cost experienced under the current formula is a reason both for and against a change to the regulations.

“Right now I don’t think I’ve got a preference (on whether the engine rules should be altered), because (by 2017) we’ve spent three years and lots of money just to throw those engines in the bin and start again,” he said.

“I’ve always said that it’d be nice if we had the ability to run some of our technology that is in our road cars.

“From that perspective, I’m not particularly concerned about a change.

“If I could buy an engine off the Nismo shelf, rather than develop our own solution, that’d be cost effective, so that might be ideal.

“But that doesn’t necessarily impact what decision we’d make beyond 2016.”

When pressed on the importance of the white paper to a long-term Nissan commitment, Emery said it’s “more likely than not” that it will continue.

“I can’t see that V8 Supercars, the category as we know today, is going to lose that status by changing whatever they do.

“So I think it’ll be more likely than not, irrespective of what changes they make, that we’d be looking to continue.”

Emery was firm when ruling out a move from the current four-door Altima to the GT-R coupe, even if such cars are accepted into the championship.

“I would not be putting GT-R in V8 Supercars,” he said.

“It’s not where the car sits in terms of its positioning.

“There’s a global GT3 platform for GT-R and that’s where we would leave it.”