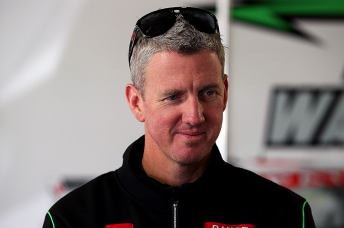 Steven Johnson says he’s in the best physical shape of his career heading into the Wilson Security Sandown 500 after shedding almost 25kg in the last 10 weeks.

The 40-year-old kicked-off an intensive diet and training program on July 1 in preparation for the three-event Pirtek Enduro Cup.

Johnson endured a well publised battle with weight during his full-time driving career, which saw him race for his father’s famed Dick Johnson Racing squad for 13 seasons.

Starting his latest healthy-eating program weighing 116kg, Johnson set a goal to reach 91kg by Bathurst, and has already made it down to 93kg for this weekend.

“Before Townsville I decided to get serious about what I was eating and how I was training in order to be the best prepared I’ve ever been for the enduros,” Johnson told Speedcafe.com.

“I’ve done every diet program known to man over the years, going up and down with my weight, but this is by far the best thing I’ve done.

“For the most part this has consisted of vitamins and supplements, all natural stuff that your body needs but doesn’t get from a lot of foods. “We were doing two days a week of cleanse days (without eating) and five what we call ‘shake days’, which includes specially formulated shakes, but also normal, lean meals as well.

“The last two weeks were then a little bit more food, more protein, to make sure my energy levels were right for Sandown.

“We set the goal of 91kg by Bathurst after I had body scans done for bone density, muscle mass, fat content and all the rest of it.

“I haven’t been under 97kg since high school.

“I’m still going to be eight to 10kg heavier than (co-driver) David (Wall, who the car’s driver weight ballast is set to), but it’s better than being 30kg over, which is a big difference.

“Not only that, getting in and out of the car in the driver changes, and just generally being fitter and more alert is where it’s going to be the biggest advantage.

“It’s also hopefully going to make me live longer and be healthier and happier with the kids, which for me is the biggest plus.

“Playing with your kids and having to stop after two minutes because you’re puffed out is not fun.”

Johnson believes that his weight was “definitely” a disadvantage during stages of his full-time career and concedes it likely hindered the chances of gaining a seat away from his family’s team.

“Certainly when I was at my biggest, it certainly didn’t send a good message up and down pitlane, that’s for sure,” he said. Johnson has lost 26kg since starting the diet program

“But we can’t change the past and if we can send the right messages now we’ll see what we can do for next year.

“It’s still my ultimate goal to get back in full-time, but we’ll see how the enduros play out and go from there.”

As for the Pirtek Enduro Cup, Johnson has high hopes that DJR can challenge the bigger, front-running outfits.

“I’ll be disappointed if we don’t get in the top five,” he said.

“The cars have been up and down this year in terms of speed, but if we get the ingredients right on the day we’re going to be fast.

“I’m confident that we’re capable of being in the top five, if not contending for a podium.”

Johnson has enjoyed only limited mileage aboard the #17 Ford so far this year, clocking laps at the team’s one and only test to date, as well as at two ride days.

His preparations did include a two-event Dunlop Series program with Matt Stone Racing, although a litany of mechanical issues and on-track incidents limited progress.

“It would have been good to do more laps but I think by the time we get to Sunday we’ll be on the money,” he added.