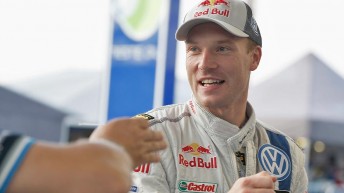 After both Volkswagen Polo R team-mates crashed out of the previous round in Germany, Latvala remains positive ahead of the Coates Hire Rally Australia at Coffs Harbour this weekend.

The Finn says there is less pressure on him going into the event than last year when he was in his maiden season with the Wolfsburg manufacturer.

“I was struggling in this rally last year (finished fourth) to be honest compared to 2011 when I was doing really well and I was second for quite a long time,” Latvala told Speedcafe.com

“This year I’m more confident with the car and I know the set-up and so I think it will be easier than last year.

“In 2013 I had two accidents coming into Australia and there was quite a bit of pressure on the manufacturers championship to score points.

“There was more pressure last year coming into this event.”

Latvala has scored three wins this season compared to Ogier’s five, which remains the former Ford driver’s most successful season in the WRC.

“Up until this point I’ve never had a season where I was still fight for the title.

“Even in Germany, during the rally itself it was still my best driving in the mixed conditions I’ve ever had.

“So there was a lot of positive things in Germany but unfortunately this went wrong at the end.

“Hopefully I learned my lesson in Germany,” he added.

“It’s a good structure what we have built to keep it going until the end of the year.

“I try to keep keep it positive. It doesn’t help if I try to worry too much about what’s happened in the past.”

Crews are currently undertaking the all-important recce and refining their pace notes ahead of the Thursday shakedown and the opening special stages on Friday.