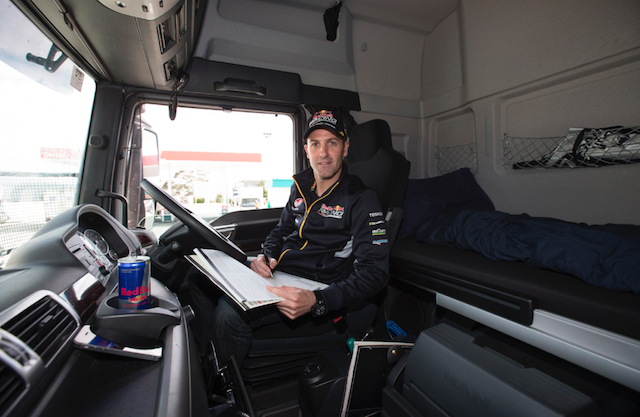 Jamie Whincup has enjoyed a unique preparation for this weekend’s Wilson Security Sandown 500, driving the Red Bull team’s transporter to the Melbourne event.

“I absolutely love driving the truck and with the endurance season starting this weekend, there’s no better preparation for me than to do the long haul out on the open road,” Whincup said.

“Our transport driver Warick ‘Wazza’ Beames was a bit white-knuckled at the start because he doesn’t usually hand the keys over to his pride and joy so I was very grateful to get the opportunity.”

The 31-year-old Whincup believes that his Red Bull Holden team-mate Craig Lowndes and Volvo Polestar Racing will be his major threats this weekend.

“I think my biggest competition this weekend will be my teammate Lowndesy, I hope he’s up there firing as he does in the endurance season,” he said.

“Without doubt, the Volvo team will be right up there because that thing is so fast in a straight line and if they do a good job they’ll be well up the track.”

Whincup teams with co-driver Paul Dumbrell for a third consecutive year, with the pair winning the Sandown 500 together in 2013.