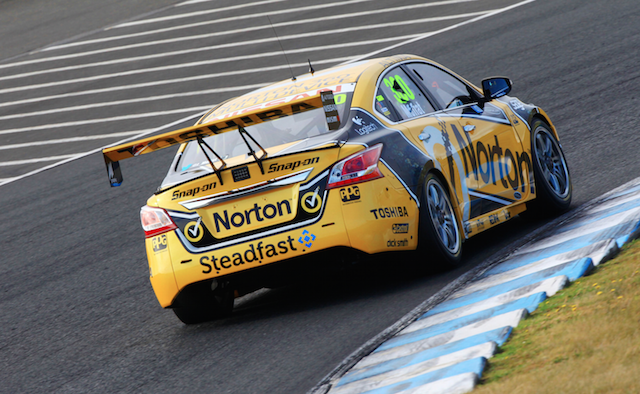 Internet security giant Norton has confirmed that it will depart the V8 Supercars Championship at the end of the season, severing ties with Nissan Motorsport.

Norton joined the four-car Nissan squad at the start of 2013, backing the two entries of James Moffat and Michael Caruso.

The sponsor had moved with Moffat from Dick Johnson Racing, having first partnered with the driver in the Dunlop Series.

“Norton recently made the decision not to renew its sponsorship of Nissan Motorsport in Australia, following the completion of our most recent contract, which expires at the conclusion of the 2014 V8 Supercars Championship,” read a statement from Norton.

“This decision came after a thorough review and evaluation of our brand objectives and priorities.

“Norton has been involved in the V8 Supercars for seven years and we have thoroughly enjoyed our partnership with the Nissan Motorsport team over the past two years.

“While our involvement in V8 Supercars has been successful, our company has evolved and Norton brand objectives have changed.

“We hope to identify new opportunities and suitable platforms that will align more closely with our brand promise of making security simpler for our customers.”

Norton’s decision to leave V8 Supercars sees Nissan Motorsport without primary backing locked in for any of its four cars.

The team remains in negotiations with long-time supporter Jack Daniel’s and says it is confident of having full sponsorship in place for 2015.

“Nissan Motorsport is well down the track regarding commercial partnerships for the future,” said the team in a statement.

“We look forward to revealing our plans ahead of the 2015 V8 Supercars season.”

James Moffat remains under contract to the team next year, while Caruso is unsigned.

Owner/driver Todd Kelly admitted last month that he is willing to sacrifice his own driving career at the end of this season if it helps keep the remainder of his team’s line-up intact.

Kelly also ruled out altering the team’s four-car model, regardless of sponsorship outcomes.