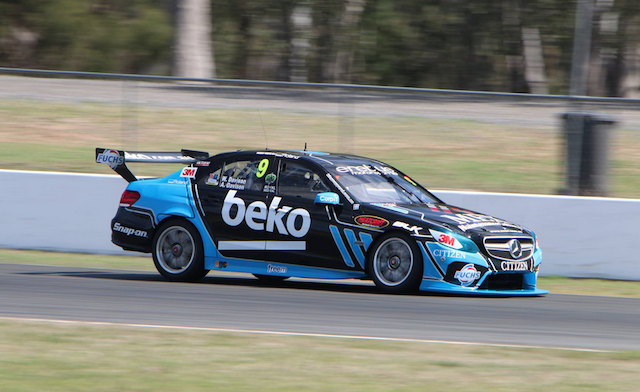 Will and Alex Davison will have an upgraded Erebus AMG V8 aboard their E63. pic: Matthew Paul Photography

Erebus Motorsport will run its pair of Mercedes-Benz AMGs in different configurations at the Wilson Security Sandown 500 as it undertakes a two-stage roll-out of its latest engine upgrades.

Will and Alex Davison will debut the long-awaited latest stage of improvements following a successful team test last week and final sign-off from V8 Supercars.

It is hoped that the developments will bring Erebus into contention for victory in the Sandown 500 a year on from the squad’s breakthrough fourth place with Lee Holdsworth and Craig Baird.

The Holdsworth/Baird entry will be without the upgrades this weekend, however, as the team continues to build up its stock of the new parts.

Erebus CEO Ryan Maddison says the Sandown package will bring “a mix of performance, driveability and fuel economy” improvements and is keen to see how it shapes up against the field.

“We’ve evolved a long way in 12 months and I’d say this year we go in (to the Pirtek Enduro Cup) with a very competitive package,” he told Speedcafe.com.

“We’ve seen other teams come a long way with their engines over the last six months as well, so we’ll see where everyone stands come the race on Sunday in terms of performance, economy and durability.

“But make no mistake, we’re going there with two very strong overall packages, in terms of drivers, chassis and engines. We’re going there to occupy the front-runners in the field.

“If we’ve got our craft right than there’s no reason that we shouldn’t be (at the front).”

Erebus has continued to invest in its engine development despite ongoing uncertainty as to whether it will be running the Mercedes-Benz AMG package next season.

The team remains in discussions with AMG Customer Sports and Mercedes-Benz Australia over a new deal, and is also known to be talking to Volvo as the Swedish marque eyes a possible expansion of its program.

Maddison says that the team has had to push ahead with the development of its current package in order to remain an attractive proposition for sponsors.

“When you’ve got such a close environment in the category, if you sit still for a minute you’re going backwards,” he said.

“The decision for us around (committing to ongoing) development would occur regardless. It’s about survivability in the current commercial environment.

“We need to go into every race making sure we’re the most valuable package that we can be, both for our current sponsors and potential new sponsors to the business.

“We’ve got a lot of unique features to Erebus running the Mercedes-Benz vehicles in V8 Supercars that no one else can offer (to sponsors), but no matter what success is the most signifiant factory in the sport.

“There needs to be a success factor, not just glitz and glamour.”

Volvo, whose managing director and V8 Supercars program architect Matt Braid is due to exit the company on October 13, is due to make a final call on its plans next month.

Maddison says Erebus is naturally keen to lock down its 2015 package as soon as possible in order to avoid a repeat of its dramatic 2012/13 off-season in which it switched from Ford Falcons to the E63 AMGs.

“From a technical perspective the longer we prolong any changes, it makes the situation a lot more complex,” he said.

“The last thing Erebus wants is to go through a 109 day marathon again, so it’s sooner rather than later for us.”

Although the AMG Customer Sports logos will no longer appear on the doors of either of its two cars at Sandown, Maddison stressed that the change is not a sign of any alteration in the relationship between the two parties.

The Davison/Davison entry has secured increased backing from appliance brand Beko, while a tweaked livery for the Holdsworth/Baird E63 is due to be revealed later this morning.

Permission to run the AMG signage was granted prior to June Darwin event, but did not come with financial support from the Mercedes-Benz performance arm.

VIDEO: Will Davison previews the Sandown 500