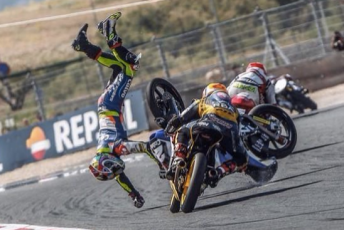 Remy Gardner, the teenage son of former world 500cc champion Wayne Gardner, has been awarded a wildcard entry into the Moto3 class at the Australian Motorcycle Grand Prix at Phillip Island from October 17-19.

Gardner and fellow Australian Olly Simpson will make their debuts in the Moto3 world championship, which currently sees Queenslander Jack Miller maintain the lead in the standings.

The news comes after a horrific crash for Gardner in Spain during the Moto3 class of the CEV Repsol championship where he suffered a high-side on his KTM before being run over by a following rider.

Gardner was lucky to escape serious injury in the incident.

His illustrious father Wayne took the Australian grand prix wins in consecutive years at Phillip Island, the first in 1989, two years after he had won the 500cc world championship.

The Moto2 category will see Max Croker and Aiden Wagner join the island action as local wildcards with the pair coming up against compatriot Ant West.

Croker, 16, took out the MRRDA 125cc championship in Australia last year as well as the Solo Under 16 250/350cc Speedway championship.

The teenager qualified for the World FIM Speedway 250cc Championship in Poland and placed a hard fought fourth in this year’s ASBK Phillip Island Round.