The Bathurst Regional Council has held a formal ceremony to name the pit straight grandstand in the memory of one of the most respected captains of the Bathurst 1000, Ivan Stibbard.

Bathurst mayor Garry Rush led a selection of dignitaries to proclaim the Harris Park grandstand named in honour of Stibbard who died after a long illness aged 76 earlier this year.

The acknowledgement comes for an administrator who oversaw the Bathurst 1000 over three decades from the early 1970’s as a successor to Jack Hinxman.

“There’s probably three events that happened here that he would call are probably the greatest things in his career,” Mark Stibbard reflected.

“In 1977 we had the (Moffat Ford) one-two finish and he had a smile on his face that you wouldn’t believe. Why? Because he had a promotional dream for 1978.

“Secondly in 1986 (Mike Burgmann’s death) not only was he a personal family friend but he was the ARDC’s accountant and how dad managed to get through that day is beyond me. He didn’t miss a beat. 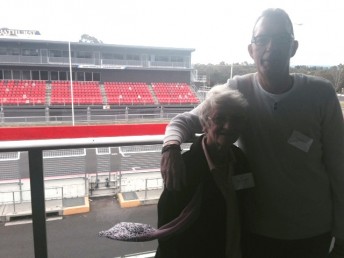 “Lastly (in) 1987 and getting the FIA to approve a World Touring Car Championship round at Bathurst which came to fruition.

“And to this day no matter what anyone says was the biggest crowd of paying customers who came through those gates that this place has ever seen.”

Cr Rush, whose council were instrumental in honouring Stibbard posthumously, said the former general manager of the Australian Racing Drivers Club was a real leader.

“I think it’s right to say that many, many managers find it far easier to preside over something that isn’t undergoing change.

“But as soon as you introduce significant change, that, in my mind takes a real leader.

“If you think about the change that has gone on over the years with this great race from the class racing structure to the V8s Ivan presided over all of that.

“Even though as role as the race secretary and as the general manager of the ARDC was a busy one he was always inclusive of organisations and individuals. He was a real gentleman.”

Long time motor racing chaplain Gary Coleman said Stibbard was a dedicated and highly respected official who stands as a hero to one of Australia’s great annual sporting events.

“I want to ask a question. How do we honour a hero? We usually don’t until its too late,” he said.

“I think the ARDC and Ivan and the Bathurst council and Channel 7 made the mountain.

“What it is today was built on the shoulders of those people.

“Dare I say it wouldn’t be what it is today if it wasn’t for those years when Ivan and his team put in together to make it such an event.”