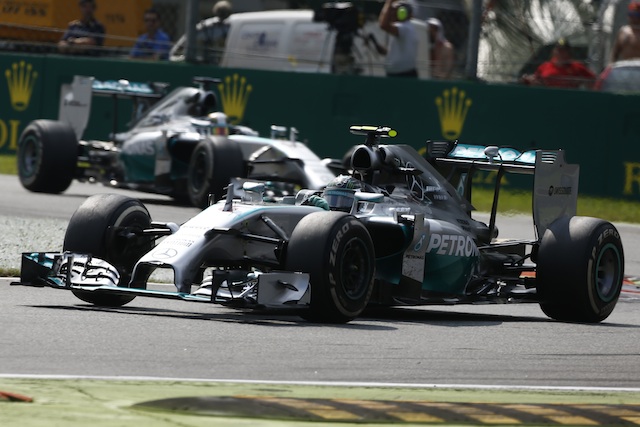 Rosberg had opened up a comfortable lead in the early stages of grand prix at Monza as he capitalised on Hamilton’s poor start from pole caused by an electronic glitch.

However, Hamilton quickly recovered from fourth to second before homing in on his opposite number at a rapid rate. Rosberg then outbraked himself twice heading into the first chicane with the second error of lap 29 handing his team-mate the lead.

Having seen his championship lead whittled down to 22 points in the wake of Hamilton’s win, Rosberg revealed in the post race press conference that it was the pressure from his team-mate which caused a “very bad’ mistake.

“Lewis was just quick coming from behind so I needed to up my pace as a result and I just went into a mistake – it was very bad,” said Rosberg.

“And that lost me the lead in the end, so it’s definitely very disappointing from that point of view.

“Monza is one of the most difficult tracks for braking because of the low downforce and the highest speed of the year.

“It is one of the challenges here and unfortunately I got it wrong two times in the race.”

For me, of course I’m disappointed now right afterwards but it’s still second place and a lot of points so it’s not a complete disaster.

“I have to look at reality.

“There is worse than that, I only lost seven points to Lewis.”

Meanwhile, Hamilton claimed he ignored the advice of his team to preserve his tyres and fuel because he felt it would not have presented a chance to beat Rosberg.

“I have a great relationship with my engineer and he really guided me throughout. If I’m losing a bit of time here or there he’s telling me so I know how to correct it.

“They want to win just as much as me so they are trying to guide me to what they think, but at the end of the day I was the one out there and the calculation worked out better the other way.”