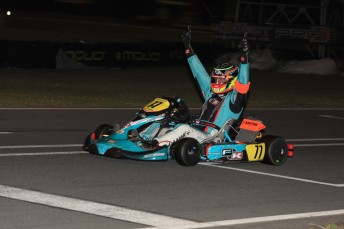 Two-time World Champion Bas Lammers was full of praise for the talent in Australian karting after making his Australian debut at the Sparco Rotax Nationals in Ipswich across the weekend.

The Dutchman was victorious in the DD2 class, while dominant for the majority of the weekend, Lammers had to fight hard for his win in the final.

Set to start from pole position, the Dutchman stopped prior to the start with a mechanical issue aboard his Formula K Australia entry.  Luckily, he was able to restart prior to the green light, however, his dramas didn’t end there.

He was then swamped at the start and dropped back to eighth spot as Jordan Boys led the way.

By mid-race Lammers had charged his way back to third place as Boys and Jaxon Evans were battling for the lead.  With ten laps remaining Evans and Boys came together at the end of the back straight eliminating them both and allowing Lammers to regain the front running.  He then took a comprehensive victory over 2013 winner Kel Treseder.

“I have really enjoyed my time here in Australia and would love to come back for more racing down here,” said Lammers.

“Having raced here before I didn’t really know what to expect about the level of talent apart from the fact that I know Australia has produced some really good motorsport stars over the years.  After racing here I can see why that is the case.”

Jenner was dominant throughout the weekend, beating out almost 60 competitors, including 17 time Australian Champion, David Sera. He was untouchable in any race, taking the final by the best part of two seconds, in the process confirming his place on the Australian team for the World Finals in Spain at the end of November.

Young Canberra racer, Morse, had to hold out a spirited group including Junior Max front-running regular, Bryce Fullwood and Castrol EDGE Stars of Karting front-runners – Jayden Ojeda (who won the SOK event at Ipswich earlier this year) and Zane Goddard.

North Queenslander, Barbera’s win came in dramatic fashion after Kel Treseder made an ambitious move for the lead on the final lap that eliminated himself and fellow pacesetter Brendan Nelson at high speed. Nelson and Treseder had traded the lead on multiple occasions from the start of the 20 lap race.

Whilst the pair diced, it allowed the pack to catch, ultimately resulting in a stunning eight kart battle with two laps to go. It was considered one of the best kart races in Australia for many years in the eyes of many pundits.

Harrison Hoey was victorious on debut in the Sodi Junior Max Trophy Class while Adam Hunter continued his domination of the DD2 Masters class.